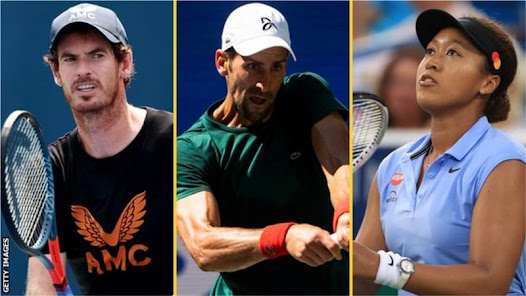 Serena Williams, Roger Federer and Rafael Nadal are all missing the New York event through injury - the first major without the three of them in a singles draw since 1997.

Djokovic, 34, will be the main focus as he attempts to complete a rare calendar sweep of the Grand Slams and pull clear of Federer and Nadal in terms of major victories.

Australia's world number one Ashleigh Barty is widely considered as the player to beat in the women's singles, although Japan's defending champion Naomi Osaka is aiming to lift the title for the third time in four years.

Another star name who will be at Flushing Meadows is Andy Murray. The 34-year-old Briton has overcome the minor thigh injury that forced him pull to out of the Tokyo 2020 Olympic Games singles last month.

After being closed to fans last year, the tournament will be the first Grand Slam since the coronavirus pandemic started to be allowed a 100% capacity throughout. No spectators meant a $180m budget deficit for the United States Tennis Association in 2020.

Fans at the Billie Jean King National Tennis Centre will not be required to show proof of vaccination or wear masks outdoors.

Players will be subject to regular coronavirus testing but are not required to stay in a tournament bubble, meaning they are free to wander around Manhattan as they wish.

The message from the players about how the isolation bubbles were affecting their mental health was "loud and clear", US Open chief executive Stacey Allaster said.

"It was important they could have some flexibility," she added.

Dominant Djokovic is the favourite - but who is best placed to deny him?

After winning this year's Australian Open, French Open and Wimbledon, a fourth victory for Djokovic at Flushing Meadows will enable him to enter an exclusive club.

Only five players have previously won all four majors in the same year, with Australian great Rod Laver the only man to have achieved the feat in the Open era.

"There's no doubt that Djokovic is the clear favourite, his form in the majors has been incredible - it speaks for itself," former British number one Tim Henman said.

"To play so well on hard courts, clay courts, grass courts, I think it really emphasises what a complete player he is.

"So when I reflect on the chances of him completing all four, I think it's Djokovic against the field."

So, who is best placed to deny Djokovic?

Germany's Alexander Zverev ended Djokovic's hopes of a 'Golden Slam' - all four majors and the Olympic title - with victory in their Tokyo 2020 semi-final last month, going on to win the gold medal himself and then triumphing in the Cincinnati Masters last week.

Russian second seed Daniil Medvedev - the 2019 runner-up who has strong pedigree on the North American hard courts - and Greek third seed Stefanos Tsitsipas, who lost his maiden major final to Djokovic at the French Open in June, are also looking to challenge.

But there will be no Dominic Thiem. The defending champion from Austria is out for the rest of a season with a wrist injury.

With an all-court game that has yielded five titles so far this year, 25-year-old Barty has cemented her place as the world number one and goes into the US Open as the favourite.

After lifting the Cincinnati title last week, Wimbledon champion Barty has notched a tour-high of match wins (40) in 2021 and a 14-1 winning record against top-20 opponents.

The women's game has been long been unpredictable and there is again a wide open field where a lengthy list of players could conceivably end Barty's bid for dominance.

Osaka, 23, is the obvious name but comes into the tournament having won only three matches in the past three months.

Since taking time off the tour after revealing at the French Open her mental health struggles, the four-time Grand Slam champion has not rediscovered consistency in her powerful, aggressive game from the baseline.

Belarus' Aryna Sabalenka is seeded second as she looks to improve on her run to the Wimbledon semi-finals, while Czech 2016 runner-up Karolina Pliskova and Canada's 2019 champion Bianca Andreescu are also among the top seeds.

Former world number one Murray is the biggest draw from a British perspective, although he has been landed a tough opening match against Greek third seed Stefanos Tsitsipas in New York.

After major hip surgery in January 2019, Murray has fought back to resume his singles career but has been besieged by a series of niggling injuries.

The 34-year-old, now ranked 114th in the world, showed encouraging signs in the warm-up events in Cincinnati and Winston-Salem despite going out in the second round at both.

"My level is up and down with no real consistency," the Scot said. "There are moments in matches where I play well and then I make mistakes or miss returns. I wish I wasn't doing that.

"My level is around 50 or 60 in the world. It's frustrating because if I wasn't moving great and not feeling good physically then I would be a bit easier on myself.

"But when I'm winning a low percentage of second-serve points, that's got nothing to do with the physical side of things."

British men's number one Dan Evans, 31, is seeded 24th but has struggled for form in recent weeks, losing his opening matches in Washington, Toronto and Cincinnati before going out in the Winston-Salem Open second round this week.

Johanna Konta, Britain's leading women's player, has dropped to 47th in the world rankings after a difficult year in which she has continued to manage a long-standing knee injury, contracted Covid-19 to rule her out of Wimbledon and split with coach Dimitri Zavialoff for a second time.

There was a huge positive earlier this month, though, when she beat Ukraine's world number five Elina Svitolina in Montreal.

Heather Watson - who impressively pushed Barty before succumbing to a straight-set defeat in Cincinnati - and men's 26th seed Cameron Norrie are the other Britons with automatic entry into the main singles draws.

Teenager Emma Raducanu is aiming to follow her eye-catching run at Wimbledon - where she announced her arrival on the Grand Slam stage by reaching the fourth round - by coming through qualifying, as are Katie Boulter and Harriet Dart.

Britain's Alfie Hewett, Gordon Reid, Jordanne Whiley and Andy Lapthorne are among those competing in the wheelchair competition, while Jamie Murray and Joe Salisbury's pairings are the ones to watch in the men's doubles.