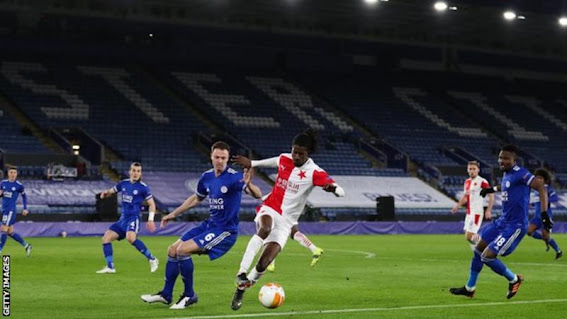 Scottish champions Rangers have been drawn against Lyon, Sparta Prague and Brondby in Group A, while Celtic are in Group G with Bayer Leverkusen, Real Betis and Ferencvaros.

In the the Europa Conference League, Tottenham will play Rennes, Vitesse and NS Mura of Slovenia in Group G.

The first group stage matches will take place on Thursday, 16 September, while the final round of fixtures are due to be completed on 9 December.

Leicester finished fifth last season to qualify for the Europa League for the second successive year, while West Ham secured a top-six finish to secure their place in the group stage for the first time.

The Foxes reached the last 32 of the Europa League last season before losing 2-0 on aggregate to Slavia Prague, who eliminated Rangers in the next round.

Steven Gerrard's side were beaten by Malmo in the Champions League third qualifying round earlier this month to drop into the Europa League qualifying play-off, where they edged past Armenian side Alashkert to clinch a group stage place in European football's second tier event for the fourth consecutive season.

Celtic have also reached the group stage for the fourth year in a row after surviving a second-leg scare to beat AZ Alkmaar 3-2 on aggregate.

Before the draws were made, Villarreal forward Gerard Moreno was voted Europa League Player of the Season 2020-21 ahead of Manchester United duo Bruno Fernandes and Edinson Cavani.