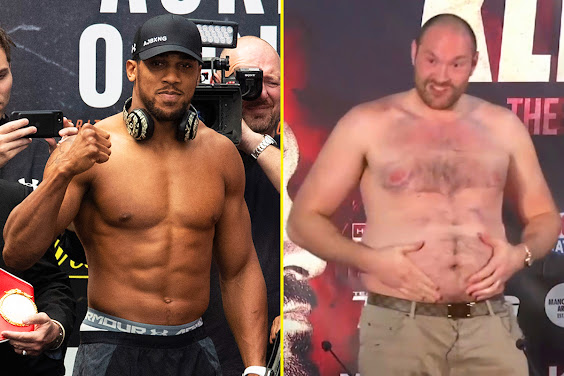 Fury, 32, sat down with Joshua's promoter Eddie Hearn for the No Passion No Point podcast and detailed how he expects to beat his fellow Briton.

The pair are widely expected to fight this summer if their teams can finalise a deal long in the making.

"I will cut Anthony Joshua down like a hot knife through cheese," said Fury. "That's how easy it's going to be."

Addressing Hearn, Fury added: "Your boy, you built him up from scratch. You've done a fantastic job by the way. You took an amateur boxer and made him into the finished article. It's a shame he has to be in the same era as the 'Gypsy King'.

"When he gets cracked right in the jaw, it's like a boiled egg with a split down the middle, it can't be repaired. He will go.

"I'll even tell you what punch it is going to be - it'll be a check left hook to the temple, his legs will go and he will fall on his face. He may get back up and I'll knock him out with a straight right."

Fury sat down with Hearn in Arlington, Texas, where he is supporting fellow Briton Billy Joe Saunders, who fights Saul 'Canelo' Alvarez for the WBC, WBA and WBO super-middleweight titles - a bout to be aired on BBC Radio 5 Live at 04:00 BST on Sunday.

Fury - holder of the WBC heavyweight title - is expected to take on Joshua - the IBF, WBO and WBA champion - in Saudi Arabia in late July or early August.

Financial terms are said to have been agreed almost a year ago but the final points of the arrangement are being worked on. Hearn told listeners of his podcast that both he, Joshua and Fury were all intent on concluding a deal.

"I can't wait to get the big dosser in the ring and give him a good hiding to prove to the world what a fake he is," added Fury.

"AJ couldn't lace my boots. He doesn't have the minerals to fight me. He's a great champion. The real difference is he's a businessman and I am a spartan. We've all got a few quid, what does it matter? We're all bare bums in the shower at the end of the day.

"You can have all the money in the world, what can you take with you? Nothing. Everything on this world will stay here but do you know what, they'll be talking about me in 1,000 years - the Gypsy King from England."