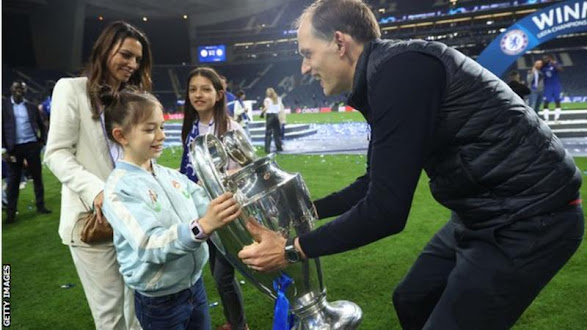 Tuchel, a loser with Paris St-Germain against Bayern Munich in last season's final, made no mistake with his second chance as he prepared and plotted to perfection to produce a finely tuned, intensely committed Chelsea side fully deserving the victory that saw them crowned champions of Europe for a second time.

In contrast, Guardiola chose to select a starting 11 he had never picked before in his time as City manager, gambling on an array of attacking talent to compensate for his decision not to use either of his outstanding midfield anchors Fernandinho or Rodri.

It was a move that left City riddled with confusion, lacking fluency, missing a midfield leader and reducing their attacking threat - in other words it was a selection that deprived the Premier League champions, so outstanding this season, of some of the elements that make them so special.

As Tuchel celebrated with his family in front of joyous Chelsea fans gathered in Porto's Estadio Do Dragao, owner Roman Abramovich beamed from the stands at yet another example of how his club turns the game's normal rules upside down.

In Chelsea's world, out of instability comes success. Managerial dismissals bring trophies, as they have done so regularly.

As it has done with Tuchel winning the Champions League after replacing Frank Lampard in January, and as it did when Roberto di Matteo replaced Andre Villas-Boas in 2012 and won this tournament for the first time.

Chelsea's fans had warmly embraced their German manager even before kick-off, huge cheers greeting his appearance for pre-match media duties. He waved back and prompted instant thunderous applause.

And in the closing stages Chelsea's followers responded with deafening noise when Tuchel turned to them and waved his arms demanding more noise to get his players over the line on this night of glory.

Chelsea had heroes everywhere, none more so than the magnificent N'Golo Kante, who delivered the complete midfield performance, this game's great manipulator and controller. When Fernandinho did finally arrive on the scene, approximately 64 minutes too late, Kante had this Champions League final by the scruff of the neck and was not letting go.

Kante's performance was one of the great big match displays, breathtaking in its skill, energy and uncanny ability to be everywhere the action was - but make no mistake his life was made a lot easier by the absence of Fernandinho, even at 36, and Rodri..

Reece James has found himself dragged into the debate about England's right-back slot for the Euros and the potential exclusion of Liverpool's Trent Alexander-Arnold but he stated his case eloquently, snuffing out the threat of a struggling Raheem Sterling to such an extent that it was no surprise when Manchester City's forward was substituted.

And in match winner Kai Havertz, Chelsea have an elegant, dangerous weapon who is now flourishing after a slow start to his Stamford Bridge career.

Mason Mount produced yet another mature masterclass that illustrated why he is a certain midfield starter for England in the forthcoming Euros. Ben Chilwell was another stand-out performer.

It is Tuchel, however, who must take the greatest credit for restoring self-belief, confidence and organisation to Chelsea after Lampard's departure, especially by making the common sense moves of putting the combative, edgy Antonio Rudiger back into the heart of defence and putting Kante in the midfield position where he operates to such world-class game-changing effect.

The champagne-soaked Tuchel was wearing a smile that looked like it might have to be surgically removed as he celebrated. And why shouldn't he celebrate? He suffered the pain of defeat in last season's Champions League final. Here in Porto, he stood among the litter of blue and silver glitter as a winner, the mastermind of a triumph that writes his name in Chelsea history.

What a contrast it was to the despair of Guardiola and Manchester City, who will leave Porto accompanied by bitter disappointment and regrets after a night on which his team failed to produce the goods.

Guardiola was hoping to write history of his own, putting his name alongside Bob Paisley, Carlo Ancelotti and Zinedine Zidane by winning this tournament for a third time as a manager.

He last won it with Barcelona a decade ago and cut a despondent figure as he strolled past the giant silver trophy that remains tantalisingly out of reach for City despite all their spectacular domestic achievements.

One of Guardiola's great qualities as a manager is his determination to fashion the beautiful game accompanied by attacking football - but maybe the in-built instincts got the better of him when he chose a line-up that raised eyebrows as soon as the teamsheets landed.

No Rodri. No Fernandinho. No protection. Attack-minded players everywhere.

Mount and Chilwell overran City down the left and, to the naked eye, it appeared that even seasoned, experienced operators such as Kevin de Bruyne - whose final was cut short by a very heavy illegal hit from Rudiger that left him with a swollen eye - Ilkay Gundogan and Bernardo Silva, seemed uncertain of what their actual roles were.

Little was seen of Riyad Mahrez, outstanding this season, while Sterling simply continued to look out of sorts, a players striving for previous good form, and on this night failing to find it.

Guardiola's strategy was high risk and the outcome suggests it was fatally flawed. He cannot escape scrutiny on his own part in a desperate night for City. He selected a team that had a negative impact on the smooth running of the outstanding side that won the Premier League with plenty to spare.

He is one of the great coaches and managers who has shaped the way modern football is played, influenced so many other coaches, but this was a night when the old questions about over-thinking were asked again.

It is hard to criticise a manager who has won the Premier League for three of the past four seasons and has such a stellar career record but he tried a line-up he had never used before in arguably the biggest game in City's history after a season of domestic domination.

Rodri and Fernandinho had figured in 60 out of 61 games for City this season, either individually or as a pair. Why change the strategy so radically and use this system in a match of such huge significance?

Guardiola's plan failed and he will have to accept the criticism that will inevitably come his way.

Tuchel has now beaten Guardiola three times since he was appointed in January, in the FA Cup semi-final and in the Premier League at Etihad Stadium.

This was, by some margin, the sweetest victory of all. This is the victory that means Tuchel has already made an indelible mark at Chelsea despite only being at the club a matter of months.

For Guardiola and Manchester City, the wait goes on. The pain will be acute because they will know they are capable of so much better.

Chelsea are the champions of Europe - a statement that might have been ridiculed on the day Tuchel walked through the doors of Stamford Bridge.