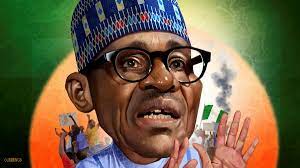 President Buhari has appealed for the release of the remaining 16 students of Greenfield University Kaduna who have been in captivity since April 18.

President Buhari made the appeal in a statement released Wednesday  night May 5 as he reacted to news of the release of the 27 students of the Federal College of Forestry Mechanization in Kaduna state. The abducted students were released by the bandits on Wednesday.

Reacting to the news of their release, President Buhari appealed for the release of all other Nigerians in captivity and pledged his government will not leave any stone unturned in ensuring that Nigerians live in a country where everyone can move where and when they want without the fear of kidnapping & banditry.

''I welcome the release of the 27 students of the Federal College of Forestry Mechanization, Afaka, and congratulate their friends, families, and the government and people of Kaduna State. We are happy they have been released.

Our deep appreciation to all who contributed one way or the other to this happy outcome, in particular the defence and security agencies, the officials of the Ministry of Environment, and the Government of Kaduna State. We equally thank Nigerians for their prayers.

I again appeal for the release of the students of Greenfield University & all other citizens held in captivity. We will leave no stone unturned in ensuring that Nigerians live in a country where everyone can move where and when they want—without the fear of kidnapping & banditry.

I call for steadfastness & security awareness on the part of the law enforcement agencies, and citizens. Let me once again condemn the increasing politicization of security in Nigeria, by opportunistic politicians. All hands must be on deck to achieve enduring peace & security.''the statement read 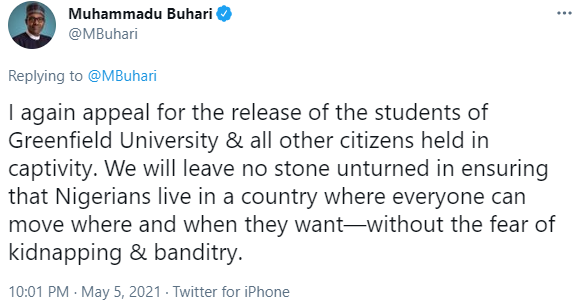