Lai Mohammed under ‘fire’ for saying FG has capacity to crush insurgents, bandits 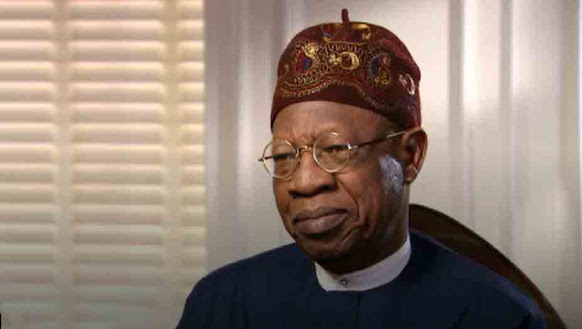 The Minister of Information and Culture, Alhaji Lai Mohammed has come under severe criticism for saying the Federal Government and its security agents have the capacity to crush insurgents, bandits, criminals and enemies of the country.

The Minister at a press conference in Lagos on Tuesday, also debunked the belief that the President Muhammadu Buhari’s administration is overwhelmed by the current high level of insecurity in the country, adding that in both personnel and equipment, the government has what it takes to tackle insecurity.

He said at the press conference: “It is no longer news that our dear nation is facing security challenges. However, I have read comments saying the Federal Government is overwhelmed and doesn’t have a clue as to how to tackle the challenges. Some have even gone as far as suggesting a truncation of the democratic order, a clearly treasonable stance.

“Well, I am here today to assure all Nigerians that while the government acknowledges the security challenges we face at this time, from terrorism to kidnapping, banditry and farmer-herder conflict, it is definitely not overwhelmed and indeed it has the wherewithal, as you will see in the days ahead, to confront the challenges headlong and restore law and order, peace and security.

“One of the most difficult things to do, for a democratically-elected government, is to use the instruments of coercion against its own people. For example, while the nation’s military have superior firepower over the rag tag band of Boko Haram and ISWAP, the terrorists most often than not operate among the populace, either in our villages or towns, hence the military, in tackling them, is usually careful to avoid collateral damage. The same applies to the kidnappers who abduct our school children.

“Usually, the location of the kidnappers is not unknown to the security forces, but they still have to exercise caution in order not to hurt the same children they are trying to rescue. Despite these inhibitions, the security forces have the wherewithal to decisively tackle the challenges.

“For the avoidance of doubt, the government retains total confidence in the ability of our security forces to tackle the security challenges we are facing now, whether it is terrorism, banditry, kidnapping or even the farmer-herder conflict.

“We, therefore, appeal to all Nigerians to continue to support our security agencies, who today face the added task of having to watch their backs while working to protect us. The least we can do is to give them our unalloyed support.”

Mohammed, who also described attacks on security agencies in the South-East and the South-South geopolitical zones of the country as a declaration of war against the country, has, however, come under fire for his comments at the press conference, especially from Nigerians on social media.

While some outrightly dismissed the minister’s words as another of his usual way of diverting attention from the real issues at stake, others outrightly wrote him off. Some other Nigerians on social media, however, charged the Nigerian government to demonstrate the capacity Mohammed claimed it has, to truly and without delay, crush the bandits.

DAILY POST reports that Nigerians have lately been on the edge, with fear pervading the country, with no where spared of its own issues bordering on insecurity.

While the North-East is battling with insurgency, North-West and North Central with banditry and farmers/herders crisis, South-West with kidnapping and herders attacks and South-South/South-East contending with the now phenomenal Uknown Gunmen (UGM), kidnapping and the legendary herders/farmers crisis.

Typically, citizens have waited for an appropriate response from government both in soothing words and concrete actions against the criminal elements making life a living hell for them, with a short fuse for anything coming from government that do not appear to measure up to what they expected. The information minister, no doubt incurred their wrath and they made no pretence in expressing their feelings, many which tended towards personal attacks.

A Twitter user, @larrymulo agreed with Mohammed that the Federal Government has the capacity to crush the bandits but is not willing to do so, implying a collusion. He wrote: “Sure, I agree with you that the FG has the capability to crush the bandits. What the FG does not have is the willingness to do so, because a master does not crush those that are working for him.”

For @omeokachie2, the problem with government is that it does not know how to use the capacity it has. He said: “We have the capacity, we don’t just know how to deploy it. One moment Buhari is waving fingers and threatening terrorists with “I can crush you o”, and the next he is “appealing” to them to stop the attacks. These people have redefined incompetence.”

@samlovaboy, in his comments, slammed Mohammed for lying to Nigerians. He wrote: “Soldiers dey bush dey defend against Boko Haram while Boko Haram dey house dey share sallah package and Palliatives. While our Minister of Lies sit down comfortably inside his office lying as usual….this country na cruise”, while @abdulkadirrrr said: Yes, you have the capacity on twitter and press statements but they are you and you are them. So how can family members crush each other? I don’t even wish my enemy to experience Buhari!”

@princefaith85 wondered why government has not gone after the criminals if there is actually the capacity to do so. He said: If u have the capacity why not go after them? This is laughable; insulting to the Nigerian Army, the pride of the Nation. Something is wrong somewhere, there are some disgruntled elements furstrateing the security system and making it ineffective to perform. It’s a shame.”

@Joejossy wrote: “Capacity to “stand with” Pantami abi? Or capacity to not have knowledge of “foolish attempts” to invade Aso Rock to perhaps STEAL our hardworking president? Maybe you mean the obvious capacity to “forgive” terrorists sha”, while @udoetukN asked: “You have the “capacity” then why do you allow insecurity to fester on? Or Do you just acquire the “capacity?”

@Babashola8, in his own contribution, admonished the information minister to refrain from speaking if he does not have some concrete to tell Nigerians.

“Sir, if you have no good information to pass to Nigerians, perhaps you should abstain from making comments that would make young people curse you and your generation. Nigerians know what’s going on, even if you offer alternative facts to cover the truth, they know the truth sir”, while @bedebartolome1 asked: “Does these pops have a conscience at all… It is a shame to be shameless. Our security forces have said they are outstretched and the rest of us are praying for them only for this man to come and yap off about their capacity to fight.

While @Thony_mart asked to know where the capacity of the government is, wondering if Nigerians will have to wait until they are dead, @FREDRICKELLIO13 wrote: “Lai has started to talk again! Herdsmen & Bandits + thugs are running round everywhere in the country & Minister is talking capacity. What capacity is he exactly talking about?? OGA pls speak English.”

@ProfAkhidime however called on government to back its words with action, saying “It is one of the laudable attribute of good leadership to build hope in the led in trying times, but such hope building mechanism must go beyond words to serve the desired purpose. Let words be backed by actions”, while @bashirmamman said: “The attribute of the good leadership is to build hope in the led, not to destroy. For me, they should demonstrate this capacity so that sanity and peace reigns everywhere in this country.”

@Ifeanyi_umazi was more direct than some others when he wrote: “This further portrays your wickedness, devilish and insensitivity of the common man’s plight cos. Why wait when you have the “capacity” when people keep dying in their thousands and huge sums that could alleviate poverty paid as ransome”, while @otonspiff said: “You know!!! So what you waiting for? You are enjoying the killings? The other time you said government was soon going to publish the names of sponsors of terrorism in the country. Oga you know everything needed to round them up yet you there wasting time. Na wa o.”

For @ufonu, it was time government demonstrate the capacity it has. “They should demonstrate this capacity so that sanity and peace reigns everywhere in this country. It’s been so so bandit attacks here and there, UGM attacking police station and killing officers and kidnapping. Please crush the bandits n terrorist with this capacity make we rest”, while @franklinbayo sees drama in the entire insecurity in the country. He wrote: Buhari was appealing to them here while Lai is telling us they have what it takes to crush them. Just read where one said bandits are tired and want peace. These and many more drama”

@Oracle_GF did not spare the minister, as he wrote: “This man must be under a spell to lie. Whoever he must have offended should forgive him else; he will even lie to the devil in hell. Which FG has the capacity to crush bandits? With what? How? This @OfficialAPCNg member like took an oath to lie without ceasing”, while @rosewater57 wrote: “The FG cannot be overwhelmed by a situation it is actively supporting and participating in. FG just loves to see the citizens kidnapped & murdered in their homes.”

@rotimilawuyi said: “This is somehow. FG has capacity to crush bandits and terrorists? So what is it waiting for? How many people have to die or be kidnapped before this capacity is released? Why do govt officials make statements like this? They don’t understand English?”, while @NjoroMichael ssid: “At this point, I’m inclined to believe the FG is straining to convince itself, and not even citizens. The language – and subsequent inaction, too – they’ve been using recently give them away. Scary, what this actually portends for the nation”

@BashirAhmaad believes Mohammed has only come to divert attention from the real issues and he said: “You see how the Master dishes his own? Now, we’ll focus on his droppings than the actual event. Whatever comes out of Boss Lai Mohammed sends everyone to another dimension; “Truth or False”, while @Ezbaronkings counselled Nigerians to stop taking the minister seriously. “You guys should stop taking this man seriously. There is absolutely nothing this govt does bad that he will acknowledge let alone criticise. That’s his 9 to 5. That’s the way the work is.”