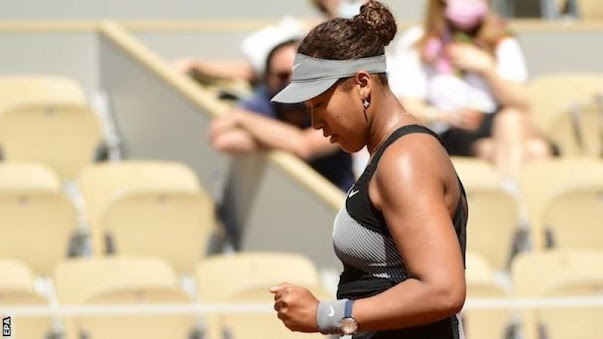 Japan's Osaka said last week she will not give any news conferences during Roland Garros because she wants to protect her mental health.

The Grand Slams added that following Osaka's announcement on Wednesday, Roland Garros teams asked the 23-year-old to reconsider her position and were unsuccessful in their attempts to check on her wellbeing.

After a "lack of engagement" from Osaka, the Grand Slam organisers wrote to her to offer support, as well as to "remind her of her obligations".

"A core element of the Grand Slam regulations is the responsibility of the players to engage with the media, whatever the result of their match, a responsibility which players take for the benefit of the sport, the fans and for themselves," the statement said.

"We have advised Naomi Osaka that should she continue to ignore her media obligations during the tournament, she would be exposing herself to possible further Code of Conduct infringement consequences.

"As might be expected, repeat violations attract tougher sanctions, including default from the tournament and the trigger of a major offence investigation that could lead to more substantial fines and future Grand Slam suspensions."

It added that the rules exist "to ensure all players are treated exactly the same".

How did it get to this point?

On Wednesday, Osaka released a statement saying she would not face the media during the course of the French Open, citing the impact of news conferences on the mental health of players.

She said expecting players to answer questions after a defeat amounted to "kicking a person while they're down".

"I've often felt that people have no regard for athletes' mental health and this rings true whenever I see a press conference or partake in one," she said in the statement, which she posted on social media.

Grand Slam rules state players can be fined up to $20,000 (£14,160) for failing to meet their media obligations, with the Women's Tennis Association (WTA) saying the players "have a responsibility to their sport and their fans" to speak to the media during competitions.

Many athletes, both in and out of tennis, applauded Osaka's stance, though many accepted that speaking to the media is "part of the job".

Following her win over Tig, Osaka did take part in the usual on-court interview with the victor.

"My movement on clay is a work in progress. If I keep playing more matches, hopefully it will get better," she said.

'An explosive statement' as Grand Slams 'stick together' - analysis

It is an explosive statement from the four Grand Slams and some rare unity from the world of tennis.

Whatever you think about the rights and wrongs of this, Osaka has got into a mess at the start of the second Grand Slam of the year.

Osaka seems to have got this wrong. I thought her initial statement was poorly judged and worded, even though she raises some points that should be debated properly.

Her post effectively tarnished the WTA for the way they liaise with players and the media for not being able to conduct a sensitive interview.

It is a strong stance and because it is coming from the Grand Slam board, they are sticking together and saying the same stance will be taken across the board at Wimbledon, US Open and Australian Open.

The fine is them following the rules - you could say they are being generous with the fine because the maximum fine is $20,000.

I think I've been close to crying in a press conference and I think many many players have been. But I have always seen the interviews as part of the job. It's something you've got to deal with on the day.

I've always found the tour to be accommodating with the 30-minute rule, where you're supposed to be in a press conference within 30 minutes of the match. If you say you need to compose yourself they try their best to figure it out and work together with everyone.

I totally understand everyone's experiences have been different and I'm sure Osaka has so many media responsibilities. I'd be interested to see if that will be whittled down going forward and the process improved.

Even if you agree with what Osaka is trying to get across and you think it can be a little unfair at times, the way she has gone about it is extraordinary. No dialogue with the WTA, no dialogue with Roland Garros or with the other Grand Slams at all.

The first they heard of any difficulties or strains was the statement to say she is protesting about it. It is a combative way of going about business from arguably one of the most powerful tennis players.