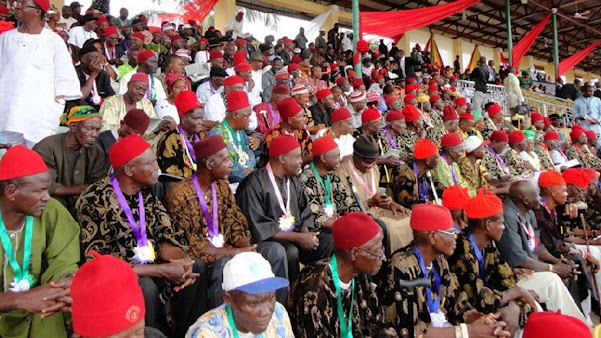 Ohanaeze described the situation where experienced military officers may be forced to retire amid the insecurity state of the country as unfortunate.

Okechukwu Isiguzoro, the Secretary-General of the organisation, however, congratulated Yahaya on his appointment as the new COAS.

In a statement by Isiguzoro, the organisation urged the new Army Chief to fight insecurity and ensure the upgrade in the welfare of his boys.

The statement reads: “Ohanaeze Ndigbo Worldwide congratulates the newly appointed COAS, General Farouk Yahaya by President Muhammadu Buhari, ” the new COAS must sustain the legacies of late Ibrahim Attahiru and dismantle the cabal sabotaging the fight against insurgents and bandits through recycling of insurgency for exclusively embezzlement of budgetary allocation on security”, which had made the war against the insurgency futile.

“About 40 Military Generals will be forcefully retired from the Army based on the endless violation of tenets of federal character, imagine incredibly exodus of senior and more experienced military officers retiring from the army because of their junior was appointed COAS, in a country permeated with insecurity, Mr. President had forced over 40 Generals from 35 RC and 36th RC to retirement because of their junior from 37th RC was appointed COAS, hope it wasn’t done in bad faith against southern Nigeria?.”

The body also lamented that Buhari’s lopsided appointments of his National Security Council was responsible for secessionists campaigns across the country.

“Ndigbo never lobbied for the position of COAS as it was predictable that the President was heading towards favoring the North without modification of the imbalance in the appointments of members of the National Security Council which is sectional and stimulates secessionist campaigns in the Middlebelt and Southern Nigeria.

“Our expectation of the newly appointed COAS is to provide new techniques to end the conflict ravaging Northern Nigeria and spreading now to the South. He should place professionalism above other considerations and ensure that officers are upgraded with modern technology and training. There should be deviations from the sordid era of brutality against unarmed agitators when armed bandits and Boko Haram are pampered and are reintegrated into the Army,” the statement added.