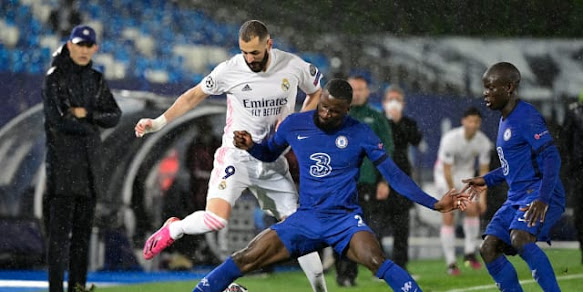 On a night of high tension, even behind closed doors, Chelsea fully deserved a victory that sets up an all-English final against Pep Guardiola's Premier League leaders on 29 May.

Thomas Tuchel's hosts were grateful to goalkeeper Edouard Mendy for two fine first-half saves from Karim Benzema but they were able to build on the 1-1 draw they achieved in Madrid when Timo Werner headed in from almost on the goal-line in the 28th minute after Kai Havertz had lofted a finish on to the bar.

It set the platform for a second half of total Chelsea domination that was nevertheless laced with anxiety as the hosts missed chance after chance to put the game to bed.

Real's former Chelsea goalkeeper Thibaut Courtois saved from N'golo Kante and Havertz, who also headed against the bar, while Mason Mount shot wildly over the top when clean through.

It was Mount, though, who finally sealed Chelsea's place in their first Champions League final since they won the competition in 2012.

The outstanding Kante, who was also instrumental in the opening goal, fed substitute Christian Pulisic and his cross was turned in by Mount with five minutes left.

The result adds another chapter to the remarkable transformation under Tuchel since he succeeded the sacked Frank Lampard in January - and gives him the chance to make amends for the 2020 Champions League final, when his Paris St-Germain side lost to Bayern Munich.

Chelsea take all the plaudits

Chelsea's win over two legs was almost as emphatic as Manchester City's dismissal of PSG in the other semi-final. The Champions League has two high-quality finalists.

Tuchel's side, totally rejuvenated under their impressive German manager, were starting to assume dominance as the first half drew to a close before totally over-running a Real side that suddenly started to look its age in the face of the energy of Havertz, Werner and Mount - as well as Pulisic when he came on - allied to the all-round brilliance of Kante in midfield.

Mendy played his part with those crucial interventions from Benzema, with Antonio Rudiger also a rock, but the home goalkeeper was virtually redundant after the break as Chelsea produced a terrific display of skill and intensity.

The only downside was their failure to take one of the many chances they created until late on, leaving the door open for a potential reprieve for Real that would have amounted to grand larceny given how they were being let off the hook.

The crucial opening strike by Werner, whose endeavour has not been matched by goals this season, will be a major plus for Chelsea, as will the display of the rapidly improving Havertz, a smooth, elegant operator who knitted midfield and attack together superbly and was a constant threat.

A final too close to call?

Chelsea will go into the final as underdogs given City's current form, but make no mistake they will fancy their chances and will pose a huge threat.

They have increased in stature as the season - and indeed this competition - has progressed and would not have been flattered had the scoreline on the night been even more convincing.

Chelsea were rock solid at the back, have a strong platform in midfield and were a real threat - albeit one that often went unfulfilled because of their own profligacy.

Tuchel will be burning to make up for last season's final loss with PSG and he has already proved he can come up with a plan to beat Manchester City after Chelsea's 1-0 win in the FA Cup semi-final, which has set up a Wembley meeting with Leicester City.

City will look back on a convincing win against Lampard's Chelsea at Stamford Bridge earlier this season that really kick-started their campaign into action.

The final has the makings of an outstanding game and it would take some courage to predict the outcome with any conviction.

Uefa have reiterated the final will take place in Istanbul, despite current lockdown measures in Turkey, after reports Wembley would be considered for an all-English final.

Ramos provided organisation and a customary yellow card but this Real side looked well past its best and in need of a rebuild, Hazard game but clearly nowhere near full fitness.

They got past Liverpool over two legs in the quarter-final based on a fine win at home but this was a toothless performance with only the evergreen Benzema, now 33, a danger.

Ramos and Luka Modric, while still making key contributions, are both 35 and Real must now start looking even beyond those Bernabeu legends when plotting the future.

Real looked tired, uninspired and well beaten at the final whistle. This looked like a team that needs breaking up and a new era ushered in, exposed by Chelsea's youth, zest and energy.

'A huge performance' - what they said

Chelsea manager Thomas Tuchel, speaking to BT Sport: "They deserve to win. First off, it's difficult because Real had a lot of possession and they made us suffer, but we were dangerous with counter-attacks and never lost the hunger, never lost their desire to defend.

"Second half was even better, the structure to defend and in the second half, we could've scored much earlier. It's a fantastic achievement and big congratulations to the team.

"Real Madrid are always dangerous, they can turn nothing into goals. So, to hang in there, even when you have chances and miss them, they never lost concentration, focus, and a positive energy on the pitch. This was a huge performance.

Real Madrid boss Zinedine Zidane to Movistar: "They deserved the win. We fought and tried but they deserved to win and go through.

"The players who have played were fit to play. I'm proud of my boys: we tried, we have got this far - just one game from the final. Chelsea played a great match and have gone through and we have to say well done to them.

"We needed to be better going forward. We didn't have any clear chances, they made a number of them and that's football. Now we rest and think of La Liga.

"Of course we're not happy. When you lose a semi-final you can't be happy and that's normal. It's tough to take, but tomorrow we'll be back out on the training pitch ready to go again."