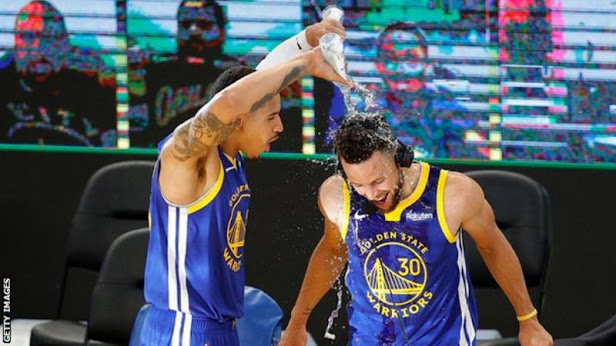 Despite Curry's landmark moment, and the victory, the Warriors are 10th in the NBA's Western Conference.

The Jazz remain top of the Western Conference, while in the east, the Philadelphia 76ers hold top spot after a 113-95 win over the Dallas Mavericks, with Joel Embid notching 36 points.

Julius Randle scored 34 points and grabbed 10 rebounds for the New York Knicks against the Los Angeles Lakers, his former team, in a 111-96 win.

The Lakers, who have won just five of the 13 games missed by star players Anthony Davis and LeBron James this season, now sit fifth in the Western Conference.

De'Aaron Fox, the Sacramento Kings guard, responded to being fined $20,000 by the NBA for criticism of game officials over the weekend by netting 43 points, although his team were beaten 117-110 by the New Orleans Pelicans.

Jae Crowder made a career-high eight three-pointers as the Phoenix Suns set a franchise record of 25 three-pointers in a 126-120 victory over the Houston Rockets.

The Suns sit second in the west, while elsewhere the San Antonio Spurs eased past the Orlando Magic 120-97 and Jonas Valanciunas recorded a franchise-record 15th consecutive double-double as the Memphis Grizzlies beat the Chicago Bulls 101-90.