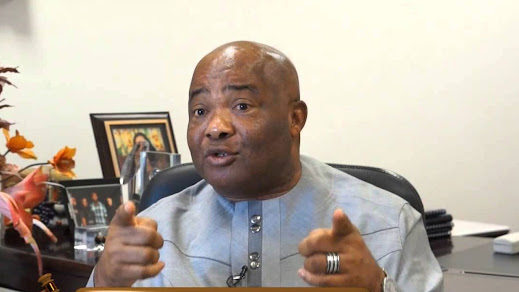 Reactions have continued to trail the current security situation in Imo State with its resultant loss of lives and valuables.

A News Agency earlier reported the attack on Sunday at the police divisional headquarters, Orji in Owerri where four motorists were shot including the State commissioner for Skills Acquisition and Entrepreneurship, Iyke Ume.

Reports also had it that at the late hours of Monday, not less than six policemen were shot dead at the Okigwe South Zonal Political command, Orieagu in Ehime-mbano LGA of Imo State, and the command razed at gunpoint.

Experts, activists, politicians and other residents of Owerri, the state capital, who spoke to our correspondent described the situation as most worrisome.

The National President of Igbo National Council Worldwide (INC), Chilos Godsent, while reacting to the situation, put the blame on the government, accusing it of handling the trend with kid’s glove.

He said that the governor, Senator Hope Uzodinma as well as other Southeast governors have sabotaged the zone over a pot of “yam porridge” by dancing to the tune of the Fulanis for one selfish interest or the other.

Hear him, “the situation here is unwarranted and alarming. Not a day that passes without the sound of a gunshot or killing.

“The unknown gunmen have gone as far as setting the state’s correctional centre and the governor’s ancestral home ablaze. All these happened within a space of two to three weeks.

“If the bandits could attack the governor’s ancestral house successfully, how much more the unarmed civilians on the streets? Something serious needs to be done and done quickly to prevent more loss of lives.”

In his reaction, the Director-General of Imo state PDP New Media, Collins Opuruzor attributed the uproar to the rising youth unemployment in the state.

He recalled that in the end of Senator Hope Uzodinma’s one year in office, the unemployment level of the state had soared to 33.3% as over 2.9million employable youths are completely out of jobs, naming the state as the ‘unemployment capital’ in the country.

He said that the governor is busy chasing shadows to the detriment of millions of Imo people whose lives are at risk.

Opuruzor added further, “the Governor should stop shifting blame to the opposition and some self-determination groups. He should stand to his feet and confront the security challenges head on. If a governor is incapable of protecting the lives of those who elected him, then he should resign honourably. Imo people will no longer tolerate this. It is becoming quite unbearable.”

A retired Army captain, David Mbamara has urged the Imo State government to thoroughly investigate the root cause of the repeated attacks in the state, rather than accusing the Indigenous Peoples of Biafra (IPOB) of being responsible for all the attacks in recent times.

The Imo-born social activist who turned out to be the founder of Fair Haven Security Nigeria Limited, further said that the governments both at the state and federal levels, have failed to address the issue of youth unemployment which, according to him, should be the greatest check against insecurity.

“When the people are gainfully employed and are provided with good welfare package, there won’t be any trace of violence. Unfortunately, the government has failed in this aspect. So, what do you expect?

“The cost of living is high. People have no jobs to fend for themselves. The people are not happy, yet the government is keeping mum over this. It is an unfortunate situation.”

Another Imo son who is a lecturer of Microbiology in Imo State University who pleaded anonymity said that the worse is yet to come if the government fails to address the issue of youth redundancy.

“Imo is a state that produces a large number of graduates annually and there are no jobs for them. Note that ten jobless graduates are ten criminals and so it goes.

“Government should provide job opportunities for the teeming unemployed youths. Until this is done, the restiveness will continue to creep like the harmattan fire.”

A cross-section of traders in Amakohia modern market, Owerri said that the situation had kept them in perpetual fear as no one knows when the enemies will strike.

A butcher in the market who also refused being mentioned, said that attack by the ‘unknown gunmen’ has become the order of the day.

He said that the fear of the unknown gunmen has kept everyone at alert even as they are marketing their wares.

“If I begin to tell you how many armed robbery and kidnapping incidents that have taken place just in Amakohia in a space of one week, you will marvel. Nobody is safe here. We are living by the grace of God.

“A few days ago, a woman was kidnapped in a nearby street and minutes after that, some robbers went to Akwakuma and dispossessed people of their belongings.

“What I’m not sure about is if we actually have a government or security agents in the state. The governor is busy chasing shadows while his people die everyday.

“This is an ugly trend that needs to be stopped immediately in order to save the lives of the people. Government should act fast and stop blaming the opposition.”