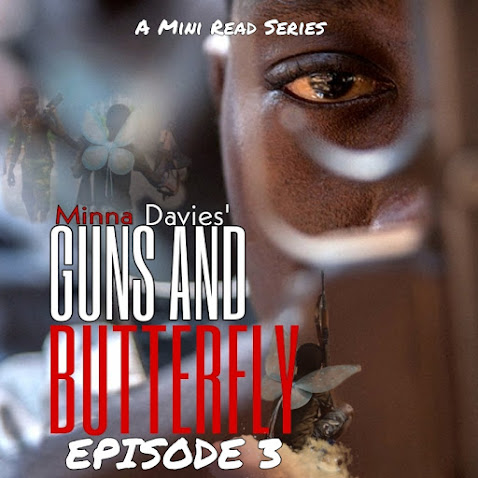 The sound of an explosion from afar alerts them.

No you will not.

You cannot stop me.

I can stop you, I am your elder

Sister. Did you just hear that?

Are you not scared?

Then why do you want to do this?

This meat is nice.

we have to keep moving.

Because Some animals cannot be reasoned with,

And your first responds is to save yourself.

He continues with his meat, Kenechukwu just stares at him a little afraid of her brothers sudden courage.

The smoke from the fireplace they have in the forest they call home still lingers in the air. Knenchukwu has her arms wrapped around her little brother as they sleep, it is a cold night.

Chukwuemeka has his eyes open to the empty night. He slowly removes his his sister’s hand from him and rolls the log in place of himself.

I will be back soon.

He runs off, before he gets far he slips and falls.

Knenechukwu flinches a little in her sleep.

Chukwuemeka picks himself up slowly and sneaks away.

There is a big camp fire in the village, the soldiers are burning the villagers properties. It is like a carnival there.

The soldiers have some women singing and dancing for them, and some other people they have captured

Can I have your attention everyone.

With a cup of palm-wine in his hand. The singing stops, but the soldiers are still having there fun, talking and shouting.

I said shut up.

He gets their attention.

The battle is not won yet, this is just one

We will give them hell, till they realize

that we are one, and no one can leave.

Well you can leave, but not with what

You will not succeed with this,

We have never been accepted, and

now we want to leave,

you still don’t want us to

What do you want?

Chukwuemeka sneaks in through the back door, he can here the noise from the other end, not too far from the house.

He walks in his fathers room, peeps under the bed and brings out a box.  He opens the box and pulls the gun from it and chunks it in his trouser.

He places the box back under the bed. Just as he turns to leave, he bumps into a soldier.

Hiding are you. What do you have with you?

He grabs Chukwuemeka and pulls out his gun.

Where did you get this?

Chukwuemeka tries to take back the gun, but the soldier is too strong for him. The soldier carries him on the shoulder as chukwuemeka struggles and screams to come down, but it is useless.

Juwon, pulls his gun at the man.

I want to set you free.

Soldier bringing in Chukwuemeka to the supposed death carnival.

Leave me alone!! let me go.

The soldier throws him in the middle of the scene.

I saw him snooping, and I found this with him.

Juwon bends to talk to Chukwuemeka, trying to recognize him.

I do, I never miss a shoot, but
I missed you, I can’t forget that.

I guess this is for your father.

Do you know how to use it?

(Throws him the gun)

Chukwuemeka picks up the gun and points it to Juwon.

Hate is blinding, you see only what you

Want to hurt, you don’t see

what is behind you.

Chukwuemeka turns, he sees three men pointing their guns at him.

Make sure you do not miss your shoot,

Because either ways you will die.

Chukwuemeka is firm with his aim on Juwon, Juwon comes closer.

I will give you another option.

(Points to the man)

Shoot him and you will live.

One of the soldiers shoots the ground really close to Chukwuemeka. It scares him.

The next one will be to your head.

A soldier goes closer and puts the gun on chukwuemeka’s head.

I will count to three, onee..

Shoot me my son, I will rather die

Than live in this catastrophe

Chukwuemeka is confuse, his hands are shaking.

Chukwuemeka turns his gun really fast to Juwon and shoots.

Chukwuemeka falls on his knees looking at Juwon on the ground fulfilled, with a tear in his eyes, as his gun slips away from his hand.