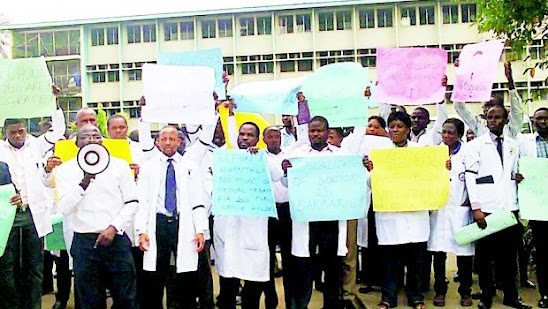 Members of the National Association of Resident Doctors (NARD) have asked the Federal Government to honour its agreement with the union.

They warned that should the government fail to honour its agreement in the next four weeks, they would be forced to declare another indefinite nationwide industrial action.

President of NARD, Dr Uyilawa Okhuaihesuyi, gave the warning on behalf of his colleagues when he featured as a guest on Sunrise Daily on Monday.

“We have been given a leap of faith to believe in the system and we hope and pray that the system does not fail us,” he said during his appearance on the Channels Television breakfast programme.

The doctor added, “If it fails us, we don’t have a choice but to call a meeting in the next four weeks, which is the timeline for this strike that we suspended.

“If our demands are not met in four weeks’ time, I think it will go back to us going on indefinite strike again.”

Members of the union had embarked on strike on April 1, but it was suspended after 10 days following a meeting with the government on Saturday.

In their demands, they sought the payment of all salaries owed to all house officers, including March salaries, and payment of all salary arrears for their colleagues in all Federal (GIFMIS platform) and State Tertiary Health Institutions across the country, especially ASUTH, IMSUTH, and UNIMEDTH.

They also called for an upward review of the current hazard allowance to 50 per cent of consolidated basic salaries of all health workers, as well as and payment of the outstanding COVID-19 inducement allowance, especially in state-owned-tertiary Institutions, among other issues raised.

Giving an update on the progress made so far since the strike was suspended, Dr Okhuaihesuyi acknowledged that significant progress has been made.

He said, “We have gained something significant, but it may not be enough to end the strike because as we speak, there is a meeting that is going to hold concerning the N5,000 hazard allowance today, and with other health workers on Wednesday.

“For the members we lost to COVID-19 (17 members were lost), we have been able to reach an agreement that the doctors and health workers involved should be able to make claims so that they can benefit from the group insurance.”

On the demand for the house officers’ payment, the NARD president noted that they have achieved at least about 75 – 80 per cent progress.

He confirmed that about 239 house officers have been paid as of Monday morning, but there were some irregularities with the payment.