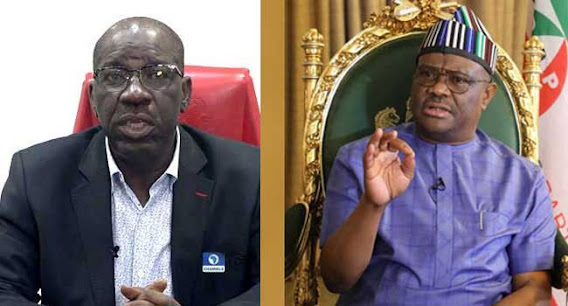 Rivers State Governor, Nyesom Wike has said that the claim by his Edo State counterpart, Godwin Obaseki, that ₦60 billion was printed by the Central Bank of Nigeria (CBN) to fund the government should not be ignored, noting it cannot be misleading.

Obaseki had on April 7 raised an alarm over the country’s rising debt profile, saying the situation is more critical now because of the huge amount borrowed to service the ailing economy.

He expressed worry that Nigeria is in huge financial trouble, adding that the Federal Government printed ₦60 billion to augment the federal allocation for March.

The claim has been generating various reactions from Nigerians, the Central Bank of Nigeria, the Minister of Finance, Zainab Ahmed among several others.

But Wike, according to a statement issued by his spokesman, Kelvin Ebiri, challenged the CBN to unequivocally declare if money was printed or not.

“Obaseki was in APC, so he understands them. So, Obaseki couldn’t have come from the blues to say they printed ₦60 billion. He knows them,” Wike said.

“Instead of answering the question, he (Emefiele) said governors have to pay back the bailout loan. The bailout is a loan, if you want to take it, go and take it. But answer the question whether money was printed or not printed.”

The Finance Minister had described the claim by Obaseki as false, saying Nigeria’s debt is still within sustainable limits and efforts are on to improve the revenue generation capacity.

However, Obaseki stood his ground and asked the Federal Government to end the current monetary rascality and stop “playing the ostrich” to prevent the economy from further degenerating.