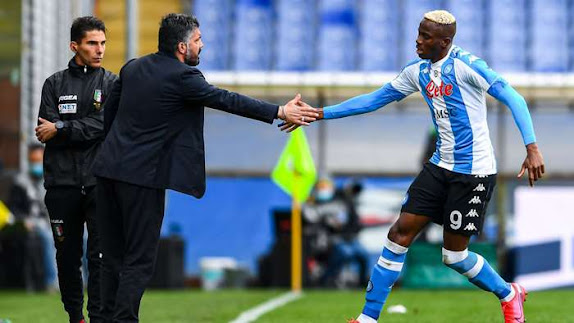 Former Inter Milan and Paris Saint-Germain midfielder Benoit Cauet said Victor Osimhen has started showing his potential at Napoli after he scored his fifth Serie A goal on Sunday.

The 22-year-old secured the visitors' 2-0 win over Sampdoria with his 87th-minute strike after Fabian Ruiz opened the scoring in the 35th minute.

The strike was Osimhen's fifth goal after 999 minutes of football in his debut Serie A campaign.

After initial struggles with a dislocated shoulder while in action for the Super Eagles last November, and a positive coronavirus test earlier this year, Cauet is of the opinion Osimhen is gradually replicating the eye-catching performances he produced in Ligue 1 with Lille in the 2019-20 season.

“We are seeing the real Osimhen. He had to settle in as soon as he arrived in Italy. Now he is starting to show what he was also doing at Lille,” Cauet was quoted as saying by Napoli Magazine.

Last week, Osimhen came off the bench to help the Parthenopeans score their only goal in their 2-1 defeat to Juventus. He won a penalty after he was brought down by Giorgio Chiellini, which was well converted by Lorenzo Insigne.

Prior to the encounter in Turin, the Nigeria star scored a goal in Napoli's seven-goal thriller against Simy Nwankwo's Crotone at the Stadio Diego Armando Maradona, a match they won 4-3.

On Sunday, Osimhen will be expected to maintain his impressive form when Napoli host Serie A leaders Inter Milan for a crucial league fixture.

While Osimhen has started to find his feet in Italy, Napoli legend Bruno Giordano queried his former club for their big-money move for the 22-year-old last year, which was reported to be around €80 million.

"The price of an attacker depends on the market and the demands the player has," Giordano said.

"I don't know if the Nigerian is worth so much: I know that Haaland at Borussia cost less and so it is logical that the square should question itself given the high expectations surrounding Victor, who is only 22 years old".