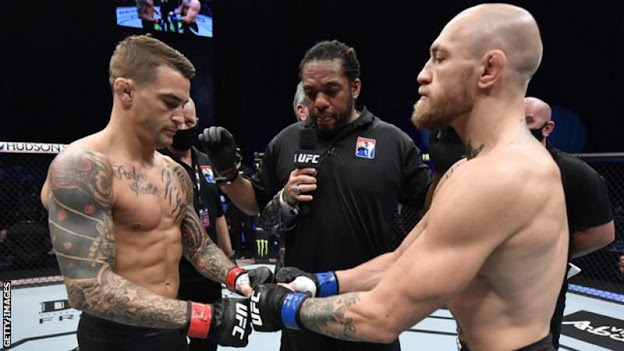 The dialogue began when Poirier responded to McGregor's Instagram post, in which the Irishman predicted he would win the bout in the fourth round.

"The fight is off btw [by the way]. I'm going to fight someone else on the 10th," McGregor tweeted on Monday.

Poirier claimed victory when the pair met at UFC 257 in January.

The contest in Abu Dhabi was noted for its amicable build-up, during which McGregor was decidedly less confrontational than he had been before previous high-profile fights.

The former two-weight world champion has not won a UFC contest since January 2020 and came out of retirement to face Poirier again after winning the first meeting in September 2014.

The trilogy fight is due to take place at UFC 264, with the organisation's president Dana White reportedly keen to stage the event in Las Vegas.