I won't be fulfilled "I am a failure without Champions League" Man City Boss, Pep Guardiola 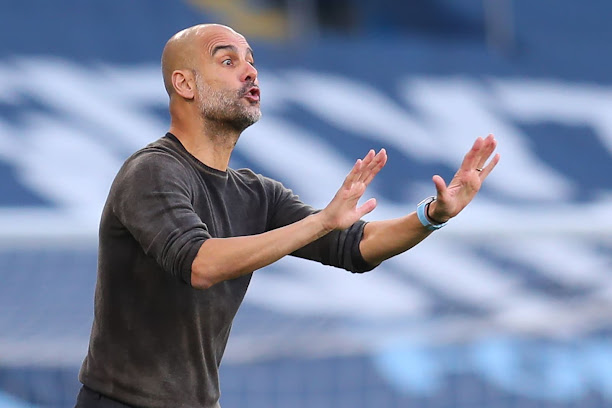 Manchester City are through to the semi-finals of the Champions League for only the second time after sealing victory over Borussia Dortmund in the last eight courtesy of comeback win in Germany.

Holding a 2-1 lead from the first leg, City found themselves needing to chase the tie when 17-year-old England international Jude Bellingham curled in a superb shot from the edge of the box.

Stung by the concession, the visitors threw everything they could muster at the German side, with Kevin de Bruyne smashing an effort off the bar before Riyad Mahrez saw a shot blocked on the line by the brilliant Bellingham.

The crucial breakthrough for City came early in the second half as Emre Can was penalised for handling in the box and Mahrez stepped up to fire his side ahead again in the tie.

Phil Foden sealed it, adding to the late goal he scored at the Etihad to give his side their first-leg lead with a fierce drive that found the Dortmund goal via the post.

City will face Paris St-Germain in the semi-finals, with the French side having eliminated holders Bayern Munich on Tuesday.

It is the first time City have reached the semis under current boss Pep Guardiola, who twice won the competition during his time as manager of Barcelona.

Their previous appearance in the last four came in 2015-16, when they were knocked out by Real Madrid in Manuel Pellegrini's final season in charge.

The defeat likely ends Dortmund's hopes of playing in next season's Champions League, with them fifth in the Bundesliga, seven points behind fourth-placed Eintracht Frankfurt.

With record-breaking Premier League titles and domestic cups aplenty to their name, City have conquered the English game under Guardiola. Another league crown is incoming and could well be garnished by a couple of domestic cups.

But European glory continues to elude them.

In the build-up to Wednesday's second leg, the Spanish manager hinted at the Champions League aspirations that partly motivated his appointment, admitting that he will be seen as a failure if he fails to deliver the prize to the Etihad during his time at the club.

Wednesday's result represents a pivotal moment in achieving that, with the psychological hurdle of getting past the quarter-finals cleared.

The manner of their second-leg win - devoid of panic, even after falling behind, and trusting in a process that ultimately saw them sweep aside a tricky opponent - puts them in even greater stead.

They may not be fielding a recognised striker in their biggest games at the moment, but in De Bruyne, Foden, Mahrez and Bernardo Silva they have a front four with the intelligence, skill and movement to pick apart any side on the continent.

Foden added once again to his rapidly growing reputation, but the real standout was De Bruyne, who largely ran the show and was denied one of the great Champions League goals when Marwin Hitz tipped aside his low shot after the Belgian had weaved his way past a series of challenges and into the box.

Dortmund spokespeople have spent much of this season refuting speculation linking forwards Erling Braut Haaland and Jadon Sancho with moves away from the club.

The supremely talented pair will inevitably attract suitors in the summer, especially with Champions League football next season now pretty much out of reach for the German side.

However, on the evidence of this match Bellingham could be the real ace in Dortmund's hand.

His superb first-half finish was merely the headline of a brilliant all-round display that saw him cover all areas of the pitch, win tackles, find team-mates and do all in his power to avoid elimination.

Not content with putting the ball in the net at one end, he proved equally adept at preventing goals going in at the other, positioning himself well to block Mahrez's shot from close range to preserve the lead.

He completely outshone Haaland, who put himself about but had only a wayward shot late in the game to show for his efforts.

Gareth Southgate is not short of midfield options for his England side, but Bellingham's display on the biggest of club stages must surely strengthen his claim to a spot in the squad for this summer's European Championships.

Dortmund are likely to be set for a busy summer of their own unless they can somehow pull of a miracle finish to their domestic season.

English sides starting to reassert themselves in Europe