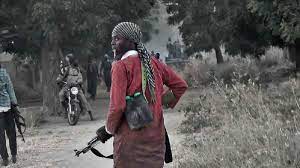 The current economic reality being faced by Nigerians may have spread to the forests where criminal elements reside as kidnappers and bandits now demand bags of rice, cartons of noodles, bread and other food items as part of the conditions to free their captives.

It has been revealed that the level of deteriorating security situation bedeviling the entire nation at the moment may not be unconnected to the current hardship in the land birthed by high cost of living as prices of essential commodities in the market have continued to skyrocket.

Recently, abductors of some residents of Kiyi and Anguwar Hausawa community in Kuje and Abaji area councils of the Federal Capital Territory, FCT, Abuja, told members of the families of their hostages to include food items in the ransom.

Some of the items demanded by the kidnappers included bags of rice, noodles, spaghetti and cartons of seasoning cubes.

According to a relative of one of the victims who identified himself simply as Joshua, the items were taken along with N1.5 million as condition for the release of each abductee.

Findings revealed that all the families of the eight people who were kidnapped alongside a Pastor of the RCCG, in Kiyi had to purchase foodstuffs and condiments for the kidnappers as demanded.

According to Joshua, “Other family members did the same thing before their kidnapped relatives were released.

“If you fail to buy those things and take only the cash to them, they will collect it and still hold the victim until you get the foodstuffs for them.”

Similarly, late last year, families of those kidnapped from Ushafa in Abuja were instructed by the kidnappers to include 30 loaves of bread, 40 packets of cigarettes and other items. This was done alongside the payment of ransom before the victims were released.

This trend has stimulated reactions from concerned Nigerians as some have blamed the bandits and Fulani militias for making farming activities difficult for farmers across the country which according to them, has resulted in food crisis.

Some believe that the inability of governments in all levels to attend to the plights of the citizens particularly in the area of job creation, has plunged the entire nation into unimaginable hardship which may have been extended to criminal elements in their various hideouts.

A resident of Kaduna State where scores were recently abducted by bandits, Ijanebu Odeh, traced the trend to lack of job opportunities which has triggered unbearable hunger in the land.

According to her: They are doing that because of the situation of the country. Imagine how employers are sacking their workers, leaving them with frustrations and hunger, to even get a job in this country now, one needs connection and when you don’t have the connection, then there’ll be no job for you.

“Those kidnapping and demanding foods for ransom are hungry. They are people that think of how to feed their belly and those of their families too.

“No working class person or a businessman will just decide to go into kidnapping because he/she has money to provide whatsoever they need.

“Just of recent here in Kaduna, El-rufai sacked so many local govt workers, leaving them jobless and most of these workers have families to cater for.

“So you see, the Govt is not trying at all and they are the cause of all these kidnappings. They should provide jobs for the youths because not everyone is good at business and there is the need to do something concerning the country’s poor economy.

“It’s not that there’s no money but our leaders have decided to take all the money to themselves and their family members.”

Meanwhile, Simon Bameyi, a radio presenter who spoke with a News Agent correspondent via telephone interview was of the view that poisoning the food items before handing them over to the Kidnappers, would be a better way of eliminating them.

He said: “It’s cool. Let’s poison the food and give them. Kidnappers killed a police officer in my area yesterday and abducted no fewer than four people.

“In fact, since this year, this place has been their abode. They also deserve to die so whenever they demand for food items, it should be poisoned.”

“Do you know how much foodstuff is in the market now? Bandits are not allowing farmers to go to farm. This has created hunger and poor supply of foodstuffs.

“If not hunger what else could make kidnappers to demand for foodstuffs? They prevented farmers from engaging in their usual farming activities and now they are also facing the reality and the repercussions of their actions”.

Also, an educationist in Makurdi, the Benue State Capital told News Agent correspondent in an interview that the country is currently “about survival of the fittest”.

According to him, “Kidnappers asking for food as ransom! As hilarious as it might sound, it just exposes us to the current reality of things in the land. It’s about survival of the fittest and in this case, the kidnappers are holding firm because one is beginning to wonder why there is this sudden rise in cases of kidnapping and banditry.

“There’s hunger in the land, universities keep churning out thousands of graduates yearly with no employment opportunities, farmers and herders crisis is persisting daily, families are losing their means of livelihood. This sudden food for ransom is a clear departure from the norm. This is simply an act of desperation for survival.

“The government of the day needs to sit up because it is in this same country in 2020 that foods meant for the poor as palliatives were stored and not given to the masses even when there was hunger ravaging the land.

“They shouldn’t forget that desperate situation calls for desperate measures or like Sound sultan said ‘one day, the bush meat go catch the hunter’. A word is enough for the salacious”.

Meanwhile, when contacted for comment on the way forward, the Force Public Relations Officer, Frank Mbah was unable to take his calls and could not respond to text messages forwarded to him.