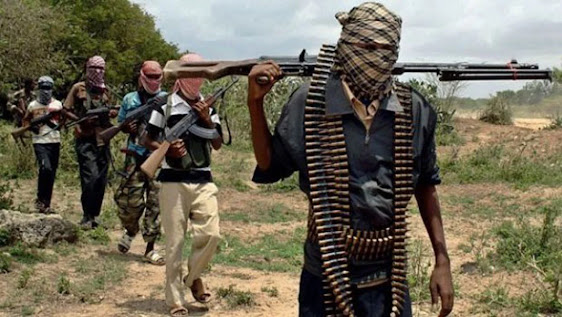 Unknown gunmen on Tuesday killed a police officer whose name is yet to be identified at the time of filing this report at Onueke market in Ezza South Local Government Area of Ebonyi State.

An eyewitness, who spoke to journalists on the condition of anonymity, said the unknown gunmen equally set ablaze a car after robbing one of the popular commercial banks located at Onueke market.

A News Agency gathered that, no fewer than three civilians were reportedly shot and dispossessed of their valuables by the rampaging gunmen who stormed the busy Onueke town.

The policeman that was killed, it was gathered, alongside his colleagues, were trying to repel the hoodlums who held the town hostage for more than an hour, but was unluckily shot dead by the robbers.

The armed robbers were said to have first attacked a residence of a native doctor identified as Azuoba, near the ongoing airport project of Ebonyi State Government, where they allegedly damaged vehicles and other property in his compound.

Thereafter, they trailed another person to a new generation bank at Onueke and shot him.

The victim whose name could not be ascertained at the time of filing this report, was said to have gone to the bank to deposit some when the robbers tracked him down.

The rampaging armed robbers who were said to be about six in number, according to sources, proceeded to the Onueke main town, where they robbed a fuel station, beer dealers, PoS operators and others of their monies and other valuables.

Though, some people from the area who spoke to our correspondent said two policemen were killed.

But the State Commissioner for Internal Security and Border Peace, Hon Stanley Okoro Emegha, only confirmed the killing of one policeman in the attack.

He, however, said the robbery attack had nothing to do with the outlawed Indigenous People of Biafra, IPOB.

Efforts to reach the Ebonyi State Police command to speak on the matter, as of the time of filing this report failed.