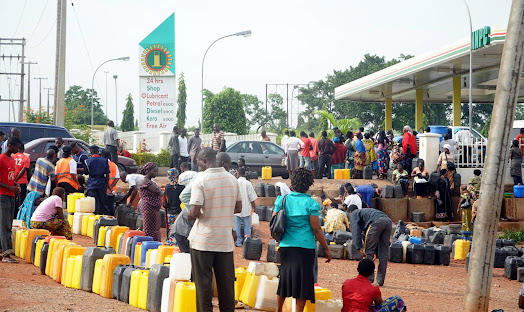 Commuters in the Federal Capital Territory, Abuja, were on Monday stranded as scarcity of the Premium Motor Spirit (PMS) popularly called petrol resurfaced across the city.

A News Agent correspondent who monitored the market situation on Monday evening observed that most filling stations between Kubwa and Zuba were not dispensing the product to customers.

Most of the attendants in the filling stations visited by News Agent correspondent deliberately refused to dispense the products to customers who were helplessly on long queues.

Meanwhile, the few stations selling were dispensing above the normal pump price. Metres were adjusted to N165 as against N160 or N163 being the case earlier.

In what seems to be based on directives from the authorities, the attendants declined to speak with reporters on what led to the resurgence of the scarcity, maintaining that they were ignorant of the cause.

A popular filling station along Airport Road, Lugbe, Abuja shut down operation before 4pm, claiming there was no fuel to dispense.

Attempts to speak with marketers proved abortive as requests were declined, while some would only say, “we don’t know”.

This is coming barely one month after fuel scarcity crumbled economic activities in the FCT due to an alleged plan by the Federal Government to increase the pump price of the product.

Recall that the Nigerian National Petroleum Corporation, NNPC. and other commercial stations shut down on March 2nd as marketers complained of scarcity in depots.

Meanwhile, it was a great day for the black marketers as price of the product skyrocketed, ranging from N300 to N350 per litre.

One of the traders, Mr Ayuba who spoke with our correspondent in Kubwa said he was praying that the scarcity is prolonged to enable him make more money.

“After selling the one I have stored since yesterday, I managed to buy 10 other gallons from one filling station and I am glad that market is moving.

“The money I have made today surpassed my total interest since the beginning of the year,” he boasted.

Mr Yusuf, a fuel station supervisor, in one of the commercial stations, said he was surprised with the large crowd queuing up for fuel.

He said he does not know what is happening, but that they have observed that other filling stations around are under lock and key.

“All our dispensing units are working, but we’re about to close now, I don’t know what we will do,” he said in the middle of the melee.

In other parts of the city, motorists were seen navigating their ways in the middle of queues to access the dispensing points for fuel but got frustrated by the reality.

At 8:00 pm, one of the NNPC outlets visited in Lugbe stopped dispensing to customers, but some of the motorists refused to leave the petrol station.

“I am going to stay and wait until these guys close everywhere in this station today, only God knows what is happening,” a taxi driver who declined to have his name in print said.

Another ‘frustrated’ customer who identified himself simply as Smart, lamented the incessant fuel scarcity in the FCT.

According to him, “the disturbing thing about this scarcity this evening is that there was no sign this was going to happen.

“Is it that there is no fuel to sell or the Federal Government has ordered them not to sell to us?

“There was nothing like this yesterday otherwise, I would have endeavoured to fill my tank before leaving for work this morning.

“Moving from here to my residence at Bwari is relatively impossible right now”.

Also, along the Dutse-Bwari expressway, petrol stations like AYM Shafa and Mobil filling station were locked against motorists on Monday evening.

Another customer on queue at a filling station who became violent over the inability to fill his car and gallon meant to power his house, and declined to identify himself, accused the FG of a possible plot to further hike the petroleum products.

“Who did we offend in this country? Why must everything turn upside down?

“Getting fuel with my own money has now become a problem.

“If they want to increase it again, they should be open to us than just keeping us on the queue. What have we not seen before,”? He said.

A tricycle driver, Mr Babangida popularly called Aboki, told Our News Agent correspondent in Dutse Alhaji that the scarcity has the potency of crumbling transportation system within the city on Tuesday.

“We came here to procure the fuel meant for tomorrow morning as we usually do but now, see what is happening.

“People that go to work very early in the morning will be stranded tomorrow as most of us will not be on the road for lack of fuel.

“Other drivers who may luckily buy fuel today, will certainly increase fare tomorrow until normalcy returns”, he stated.

However, the Group Managing Director, Nigerian National Petroleum Corporation (NNPC), Mele Kolo Kyari said there will be no increase in the ex-depot price of petrol.

He disclosed this on Monday via the company’s social media post during a meeting he held with the National Association of Road Transport Owners (NARTO)/Petroleum Tanker Drivers (PTD).

“Also, the GMD announced that there would be no increase in the ex-depot price of Premium Motor Spirit (PMS) in May 2021,” the post stated.