Chelsea's lose to Porto but qualified for the semi final 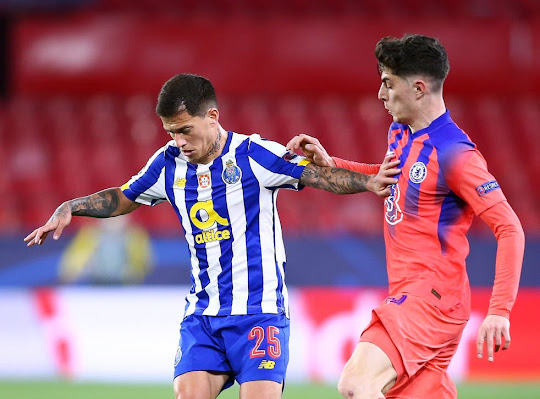 Chelsea survived a spectacular late overhead kick from Mehdi Taremi to overcome Porto and confirm a place in the Champions League semi-finals for the first time in seven years.

Thomas Tuchel's side went into this 'home' last-eight second leg - with both games being played in Seville during the current Covid-19 pandemic - protecting a two-goal lead they only briefly threatened to surrender in the dying seconds following Taremi's brilliant finish.

Chelsea, who will now face either Liverpool or Real Madrid in the semi-final, played within themselves but it was enough to keep a disappointing Porto at bay, the Portuguese side rarely testing keeper Edouard Mendy with their surprisingly cautious approach, which they only cast aside when it was too late.

Mendy's poor clearance almost offered Jesus Corona a first-half chance but he could not take advantage, while Christian Pulisic and Mason Mount had opportunities after the break.

Taremi's goal was out of character with the rest of Porto's performance and came too late to alter the inevitable course of this quarter-final.

Chelsea manager Tuchel suggested he might have preferred to keep N'Golo Kante on the bench after a recent hamstring problem, until an injury to fellow midfielder Mateo Kovacic forced his hand.

And he was rewarded with yet another masterclass from the France international, who showed supreme positional sense, tireless work-rate and that uncanny ability to spot any rare danger before prompting attacks of his own.

Kante has been an outstanding figure since Tuchel succeeded Frank Lampard and it is no surprise the German has come to count on him so readily, this understated but world-class performer completing the full 90 minutes despite doubts over his match fitness.

Chelsea adopted an understandably conservative approach, taking no chances and refusing to offer Porto any route back into this tie. Porto were largely lacklustre and rarely showed any of the sparkle that saw them shock Italian giants Juventus in the previous round.

They may not have offered any serious threat of their own, although Mount was denied by superb defending from Porto defender Wilson Manafa.

In reality, however, there was no need whatsoever for Chelsea to take unnecessary risks that may have allowed Porto back in. This was about game management and, despite that last-ditch scare, for Chelsea it was a job very well done.

Can Chelsea win the Champions League?

Chelsea's hopes of claiming the crown for a second time will certainly be rising after this mature performance, even in eventual defeat, to add to the impressive elimination of the powerful La Liga leaders Atletico Madrid in the last 16.

Tuchel has Chelsea organised, fiercely disciplined and increasing in confidence - a mood that will only grow as they prepare to face either Liverpool or Real Madrid. Yes, this was a loss but the overall tie will be regarded as a highly satisfactory outcome.

The Champions League can often be about timing the run of form and there is no doubt Chelsea have built up impressive momentum under Tuchel aside from the 5-2 thrashing at home to relegation-threatened West Bromwich Albion at Stamford Bridge recently.

Chelsea will show the requisite respect to whoever they face in the semi-final but they will not fear either Liverpool or Real Madrid, depending on who prevails at Anfield on Wednesday.

Tuchel has bolstered their defence and while this was a performance built on those solid foundations and with Kante and Jorginho as the anchors, Chelsea have already shown they have attacking weapons when required.

Chelsea will not shout about their Champions League aspirations - but there is no reason why they should not fancy their chances, even though the record will show this 'home' second leg as a defeat.