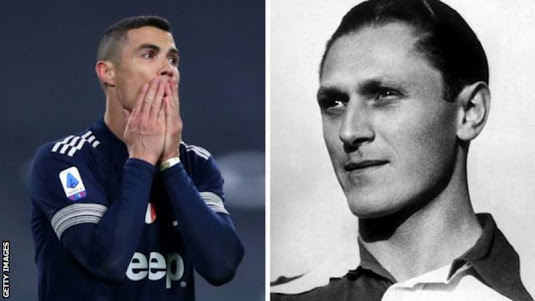 Ronaldo has scored five goals for Sporting Lisbon, 118 for Manchester United, 450 for Real Madrid, 84 for Juventus and 102 for Portugal - so there is no doubt about his figure.

But the confusion seems to come from his goalscoring rivals of olden days.

Data from Rec.Sport.Soccer Statistics Foundation (RSSSF) says Josef Bican is football's all-time top scorer (excluding players who have never played at the top level) with 805 career goals (from only 530 games), with Romario on 772 and Pele on 767.

Bican, who died in 2001, played for five clubs including Rapid Vienna and Slavia Prague as well as Austria and Czechoslovakia - in a career which lasted from 1931 to 1955.

But among the 805 goals were 27 for Rapid's reserve and amateur teams, as well as strikes which were not in official international games.

Remove those and Bican finished his career on 759 goals in 495 games. Well maybe, because RSSSF says some data is partially missing on the Czech second division in 1952.

So what of Pele and Romario? Again there is some dispute over their goal tallies - with both Brazilian strikers claiming to have netted over 1,000 goals.

Barcelona's Lionel Messi recently broke Pele's world record of 643 goals for one club... but Santos then claimed Pele's friendly goals count and he scored 1,091 for the club.

But remove friendly and unofficial strikes (including one for a military team in 1959) and Pele's 757 goals for Santos, Brazil and New York Cosmos seems to be the figure doing the rounds.

Romario celebrated his 1,000th goal in 2007 - but that included youth, friendly and testimonial games.

The Brazilian is credited with 745 goals in a career which took in spells in South America, Europe, Asia and Australia - although that goal tally seems to change from report to report.

So to answer the question, maybe Ronaldo is the joint top scorer ever. Maybe. Possibly. Not sure actually.

We do know Messi is 40 behind after scoring 719 goals for Barcelona and Argentina in an era when stats are recorded more officially.

This week, Ronaldo has a chance to maybe break the maybe-record in Wednesday's Coppa Italia game with Genoa.