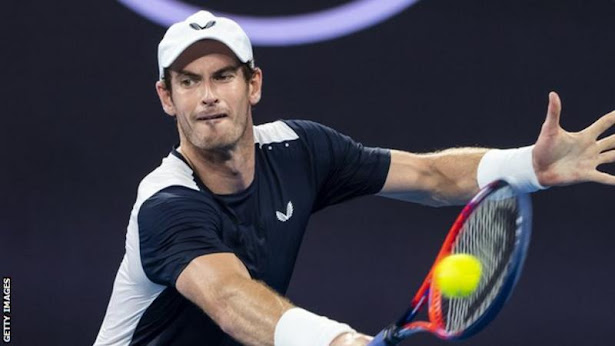 The 33-year-old Scot was set to fly out to Melbourne on a chartered flight arriving there over the next 36 hours.

Instead he remains in quarantine and isolating at home in London.

Murray, who is said to be in good health, remains hopeful he will be allowed to travel safely at a later date and compete as planned.

The five-time Australian Open runner-up pulled out of last week's ATP event in Delray Beach as he wanted to "minimise the risks" of catching a transatlantic flight to Florida.

'He will be refused'

The Australian Open will start on 8 February at Melbourne Park, three weeks later than usual, because of the coronavirus pandemic.

Players must test negative before taking one of the 15 chartered flights - which have been put on by tournament organisers and will operate at 25% capacity - to Australia.

Once they have arrived, they will have to pass a series of Covid tests during a 14-day quarantine in Melbourne before the Grand Slam.

"Mr Murray, and the other 1,240 people as part of the program, need to demonstrate that if they're coming to Melbourne they have returned a negative test," said Victorian state health minister Martin Foley.

"So should Mr Murray arrive, and I have no indication that he will, he will be subject to those same rigorous arrangements as everyone else. Should he test positive prior to his attempts to come to Australia, he will be refused."

Murray's planned appearance at Melbourne Park would come two years after he played there in what he feared would be his final match as a professional.

At 123rd in the world, Murray is ranked too low to gain direct entry into the tournament so the three-time Grand Slam champion has been given a wildcard.

Murray was able to play only seven official matches in 2020 because of a lingering pelvic injury, and the five-month suspension of the tours because of the pandemic.

The Scot is among a number of players to have their plans disrupted.

American Madison Keys, who reached the Australian Open women's singles semi-finals in 2015, said she would not be playing in Melbourne after testing positive for coronavirus.

World number two Rafael Nadal is travelling to Melbourne in search of a record 21st Grand Slam men's singles title without coach Carlos Moya, who has decided to stay at home in Spain with his family because of the health situation.

'Change of year, but not a change of luck' - analysis

A change of year does not appear to have brought about a change of luck for Andy Murray.

He is now hoping he will be given permission to arrive in Melbourne late - and outside the window Tennis Australia painstakingly negotiated with the Victorian state government.

If he does get the green light to travel, having completed self-isolation in the UK and returned a negative test, he will still have to spend 14 days in quarantine on arrival.

That means he won't be able to play in the warm-up events the week before the Australian Open.

But it would keep alive his hopes of playing in the first Grand Slam of the year, as players will be allowed out of their rooms to practise for five hours a day during quarantine.

The world number 50, a two-time Australian Open quarter-finalist, tweeted that after testing positive in November he had returned another positive on Monday and might not be able to fly on Wednesday.

But Australian Open organisers said his medical file had been reviewed by Victoria state authorities and he had then been cleared to fly.

They explained that players are only allowed to enter Australia with proof of a negative test done just before departure or "with approval to travel as a recovered case at the complete discretion of an Australian government authority".

Sandgren posted on social media that he had been ill in November but was "totally healthy now".

"My two tests were less than eight weeks apart," he wrote. "There's not a single documented case where I would be contagious at this point."

Lisa Neville, minister for police and emergency services, tweeted: "Tennys Sandgren's positive result was reviewed by health experts and determined to be viral shedding from a previous infection, so was given the all clear to fly.

"No-one who is Covid positive for the first time - or could still be infectious - will be allowed in for the Aus Open."