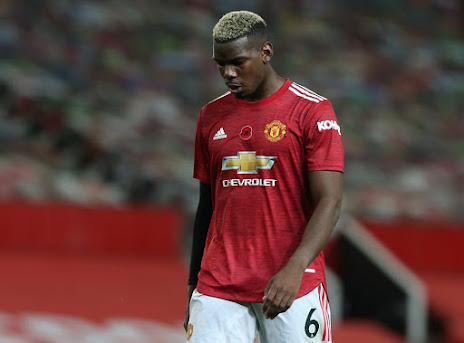 Man United manager Ole Gunnar Solskjaer felt Sunday's Old Trafford contest had "0-0 all over it" until Pogba needlessly lunged in on Hector Bellerin midway through the second half.

Bellerin appeared to be in a position of no danger when Pogba moved in and succeeded only in kicking the Spaniard, drawing the penalty which Pierre-Emerick Aubameyang converted to settle the game.

"Maybe I was a bit out of breath and it made me do this stupid mistake," the France international told BBC Sport.

"I felt like I touched him a bit and I knew I was in the box. I shouldn't have given a penalty away like that.

"I'm not the best defensively in the box but I can learn and work on that."

It was the third time Pogba, 27, had conceded a penalty during Solskjaer's time as United manager. No-one else has conceded more than one.

"Paul has held his hand up," said Solskjaer, who was overseeing his 100th game as United boss.

"He knows he could and should have done better in that instance. He knows if he stays on his feet it will be OK because the boy isn't going anywhere."

What does Pogba's future hold?

Pogba's mistake will again attract negative headlines around a player who draws extreme reactions, both positive and negative.

No-one can ever know what Pogba's future would have been had the coronavirus pandemic not ripped through the financial structure of Europe's major clubs.

Real Madrid boss Zinedine Zidane has never made any secret of his desire to bring his compatriot to the Bernabeu stadium.

However, even before the last seven months, Real's finances had not stretched to the kind of fee United wanted for a player they bought from Juventus for £90m in 2016.

The chances of it happening during the most recent close season were non-existent and it did not appear to be an accident that Pogba's high-profile and confrontational agent Mino Raiola has been talking recently about a contract extension.

A one-year option has been triggered, taking Pogba's present deal to 2022. However, his effectiveness on the pitch remains the subject of enormous debate.

Even taking out the penalty against Arsenal, he combined mixed statistics of good passing accuracy - 87.5%, the best of United's attacking players - with the fact he lost possession on 15 occasions, with no team-mate giving the ball away more frequently.

Scott McTominay was the only team-mate to cover more ground than Pogba's 10.26km, but there were no shots, a poor return for someone essentially viewed as an attacking threat.

Evidently, a point is being reached where a major decision needs to be made. If United offer a new deal, it will be enormous. If they do not, they risk losing him for nothing. On current evidence both options could be viewed as a gamble.

Solskjaer's immediate imperative is to get more from a player who tends to reserve his most effective performances for the international arena.

"We have to do better, the team and myself, but it starts with me," Pogba said.

"I cost us the goal today with the penalty but it was a poor team performance. We need to do a lot better."