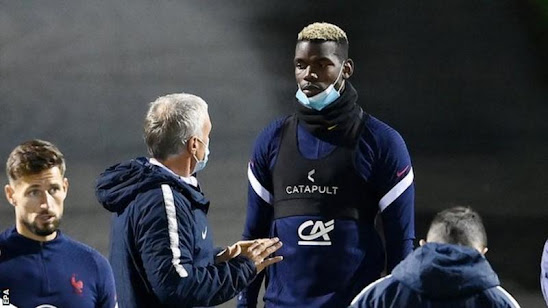 Pogba has figured in 11 games for the Old Trafford side this season but started in just five of those.

He was again on the bench at Everton last Saturday before coming on after 82 minutes in a much-needed 3-1 win for United boss Ole Gunnar Solskjaer.

Pogba is with France's squad for games against Finland, Portugal and Sweden.

"He is in a situation with his club where he cannot be happy, neither with his playing time, nor with his positioning," said Deschamps.

"He is not in his best period, he has had a series of injuries and the Covid-19 which has hit him quite hard. He needs to find his rhythm.

"With me, there is no such concern. When a player is in discomfort in his club, obviously, he is happy to play for the France team.

"He will tell me about his feelings and, as I know him very well, it will go in a positive direction."

The last time he was on international duty in October he said it was "a dream" for him to play for Real Madrid one day.

Later that month, United triggered the one-year option on Pogba's contract as they extended his deal with them until 2022.