Gareth Bale's first goal since re-signing for Tottenham helped his side beat Brighton to go second in the Premier League table. 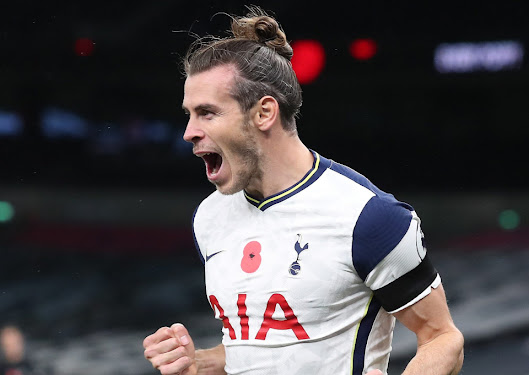 In an action-packed game, Harry Kane put Spurs ahead from the penalty spot, his 149th Premier League goal, after a video assistant referee check deemed Adam Lallana had fouled the England captain.

Referee Graham Scott consulted the pitchside monitor before allowing the goal to stand, much to Tottenham's disbelief, before substitute Bale had the final say.

The Wales forward powered home a cross by Sergio Reguilon past debutant Brighton keeper Robert Sanchez, his first Spurs goal since May 2013.

Bale to the rescue

Bale celebrated his first Spurs goal in seven years and 166 days as though he had won the Champions League again, wheeling away to celebrate with his jubilant team-mates.

Jose Mourinho turned the clock back in an attempt to get his Tottenham tenure moving into the future when he brought Bale back to the club he left in 2013 for Real Madrid.

Bale was derided in Spain as more golfer than footballer after being marginalised by coach Zinedine Zidane but he played a key role as Spurs climbed two points behind leaders Liverpool.

Mourinho demanded a reaction following his side's surprise Europa League defeat at Royal Antwerp on Thursday, a game in which he made four changes at half-time.

He got one although his side were made to battle hard against Brighton, who cancelled out Kane's opener in highly contentious circumstances before Bale stole the headlines.

Erik Lamela hit the post and Kane missed a great chance from close range to score his landmark 150th top-flight goal, yet this was not vintage Spurs.

But for the second successive league game they dug deep to come away with three points.

Brighton played without a recognised striker, with leading scorer Neal Maupay left out of the 18.

In addition, the visitors gave a debut to keeper Sanchez, whose last competitive match was against Rotherham United for Rochdale in League One last season.

But Graham Potter's side played some good football and in Lamptey, who was a bundle of energy, they have one of the most exceptional young talents in the Premier League.

His first career goal came from a pass by Pascal Gross, who has now assisted 16 Premier League goals for Brighton, double that of any other player at the club.

The worry for Potter is his side are not winning enough games.

Despite enjoying more possession than Spurs, it is now one victory in seven league matches.

Tottenham boss Jose Mourinho, speaking to BBC Match of the Day: "It wasn't a surprise because I knew Brighton were a very good team with a very good coach. They created lots of difficulties but we had a very good reaction after they equalised."

On Brighton's controversial equaliser: "I have to try and stay away from this. I don't know what to say."

On Gareth Bale's winner: "We were in need of a goal and I've been telling you for a couple of weeks that Bale is improving. I know he doesn't have 90 minutes of Premier League in his legs.

"The good thing with him is he is very intelligent, very experienced and very Tottenham. He understands.

Brighton boss Graham Potter: "There is a little bit of a talking point about our penalty decision. It is another conversation around refereeing and VAR, which I am not too interested in.

"I can't control what they do, when I saw them live I wasn't sure about Harry Kane's one. I'd rather focus on our performance, it was really, really good.