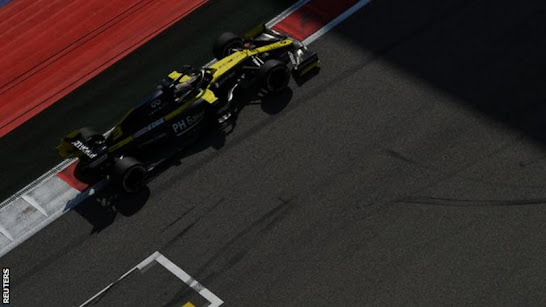 Lewis Hamilton was only 19th fastest after a difficult session for Mercedes.

Both drivers cost themselves time when they had to continue on damaged tyres after locking up.

Bottas set his fastest time on the soft tyres early in the session and then damaged the medium tyre set he fitted next on his first lap.

Hamilton, who did not set a time on the soft tyres early in the session, locked up on his first lap on his next set of tyres - hards for him - and said straight away over team radio that they were "done".

Bottas' fastest lap was 0.507 seconds quicker than Ricciardo, with Verstappen 0.147secs further back.

Sainz and Latifi were unhurt after their incidents, at Turn Seven for the McLaren driver and Turn 10 for the Canadian.

Both were similar, the drivers turning in a little too fast with a bit too much car over the kerb and looping into a spin before hitting the barriers backwards.

Sainz's incident led to a brief virtual safety car period, while Latifi's brought out the red flag, and the stop-start nature of the session meant the times were less meaningful than usual.

McLaren were trying an upgraded nose and front wing on Lando Norris' car, which will not be raced this weekend, while Ferrari had some small aerodynamic upgrades in the area under the nose cone.