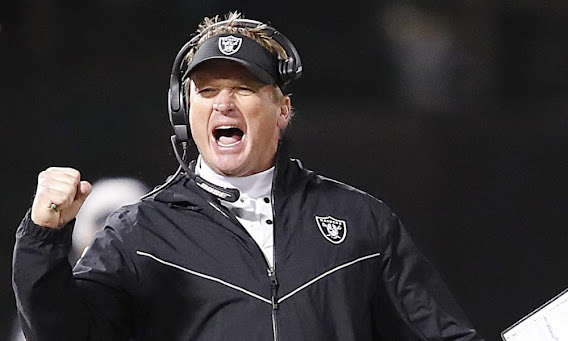 Under the NFL's coronavirus protocol, anyone with bench area access must wear a face covering at all times.

Gruden and Saints counterpart Sean Payton could face fines after being seen without masks in Tuesday's game.

According to ESPN reports, three NFL clubs and their head coaches have already been fined.

"You know, I've had the virus. I'm very sensitive about it, but I'm calling plays. I just want to communicate in these situations and I apologise. If I get fined, I will have to pay the fine."

The Denver Broncos, San Francisco 49ers and Seattle Seahawks have been fined £195,000, with the head coaches of each team having to pay £78,000 for violating rules on face coverings.

The Raiders, playing their first game at the new Allegiant Stadium, beat the Saints 34-24 to make it two wins from two games this season.