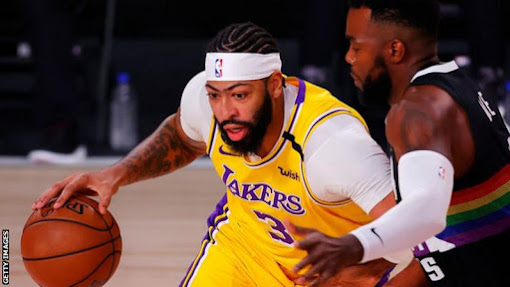 Jamal Murray top-scored for the Nuggets with 32 points but missed all of his three-point efforts.

The Lakers lead the best-of-seven series 3-1 with game five on Saturday.

"I feel like we played with a lot of energy tonight," Lakers guard Kentavious Caldwell-Pope told TNT. "Game three, I feel we had a lack of energy starting the game.

"I thought tonight we came out strong. We kept a lead the whole game."

The Lakers closed out their previous two series' - against the Portland Trail Blazers and Houston Rockets - in five games.

They look set to meet the Miami Heat in the NBA Finals, as they also hold a 3-1 over the Boston Celtics lead in the Eastern Conference finals with game five on Friday.

After Thursday's match, James paid tribute to Breonna Taylor - a black woman who was shot multiple times as police officers stormed her home in Louisville, Kentucky, on 13 March.

Two white officers have not been charged over the shooting, while a third, also white, was charged with endangering 26-year-old Taylor's neighbours.

"The emotions were very high. We have a team-mate who is from Louisville, so as heavy as it has been on us, it's even heavier on him," said James.

"We lost a beautiful woman in Breonna, that has no say so in what's going on right now.

"We want justice no matter how long it takes."