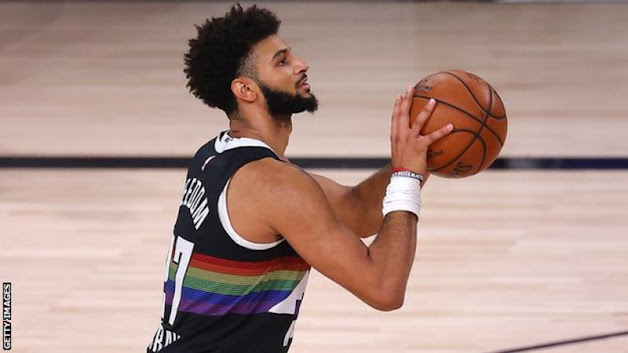 The Nuggets now trail 2-1 in the best-of-seven series after Jamal Murray scored 28 points and Jerami Grant 26.

It brought the Lakers' six-game winning streak to an end, despite LeBron James' 30 points, 10 rebounds and 11 assists.

"We're in this series," Nuggets coach Michael Malone said to his players after the win.

"We let them know we're not going anywhere. That's what you guys have done this whole post-season.

"That's why everybody is rooting for us. Keep on showing that grit and resilience and playing for each other."

Nikola Jokic added 22 points and Murray had 12 assists and eight rebounds for Denver, who have never won a conference title.

The Lakers closed the gap to 99-96 in the final quarter, but missed four three-point attempts to give the Nuggets back control.

"We turned the ball over too much and we put them on the free-throw line," said James.

"I give credit where credit is due. They played better than us. They were more aggressive than us for three quarters."

Lakers coach Frank Vogel added: "I thought Denver played with great energy throughout the game. We didn't match it early. We matched it late."

The Lakers lost just one game in each of their first two play-off series, while Denver came back from 3-1 down in both of theirs.

Game four will take place on Thursday. In the Eastern Conference finals, Miami Heat lead the Boston Celtics 2-1 with game four on Wednesday.