Kai Havertz: Who is Chelsea's £71m signing from Bayer Leverkusen? 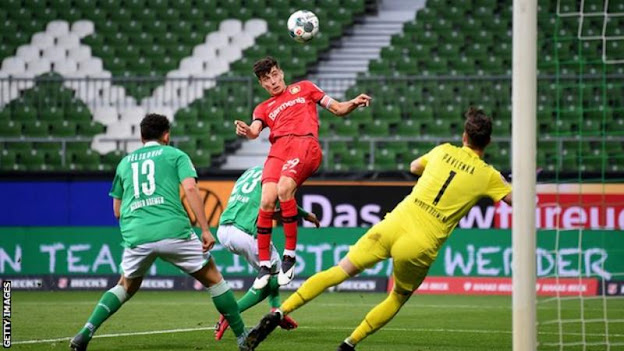 And, after what felt like a never-ending transfer story, Kai Havertz has signed for Chelsea, becoming their second most expensive signing and seventh new recruit of the summer.

Blues fans will be hoping he can help turn the team into title contenders, but why have the club agreed to pay a fee in the region of £71m - including add-ons - for this 21-year-old?

Who is this German wunderkind?

Born in 1999, Havertz has been described as the biggest talent of his generation coming out of Germany.

The attacking midfielder made waves at the age of 17, making his debut for Bayer Leverkusen during the 2016-17 season, and it was obvious from the start he would become a superstar one day.

Havertz possesses the technical skills of a typical number 10, but cannot be strictly categorised as one - his height (6ft 2in) and dynamic style make him an option for various roles.

He has often played in attacking midfield for Leverkusen, but also in central midfield, on the right wing, and more recently as a striker. National coach Joachim Low also likes to test him in a deeper role.

Some in Germany see him as the new Michael Ballack. The former Bayern Munich and Chelsea midfielder had similar attributes, not only pulling the strings with passes but also making powerful runs into the box.

While Havertz may lack Ballack's outstanding physicality, he can be an intelligent runner that suddenly emerges behind the backline to score.

Havertz is a modern playmaker who combines passing skills, vision, calmness under pressure, and a high level of athleticism. He doesn't try sneaky tricks and doesn't do anything inefficient. He is a no-nonsense player in the mould of his new manager Frank Lampard.

Havertz doesn't have the most colourful personality and, like many other German players of his generation, lets his feet do the talking.

He grew up as the son of a policeman and a lawyer in the small village of Mariadorf, becoming a fan and youth player of local club Alemannia Aachen.

As a 10-year-old he caught the eye of Bayer Leverkusen scouts, who convinced him to move to the Bundesliga powerhouse.

As the young Havertz was still living in Aachen, he had to commute from school to Leverkusen's youth academy several times a week. Once he joined the under-17 team, he moved into the house of stadium announcer Klaus Schenkmann.

There is no rags-to-riches backstory.

"Kai is lucky that he comes from a level-headed family. His mother and father are both down to earth," said Jurgen Gelsdorf, the former head of Leverkusen's academy.

Havertz ended up taking his A-levels when he was a regular member of Leverkusen's senior team, once saying: "I couldn't go to school in the morning because we were training."

He had to catch up on the teaching material in the afternoons. "At some point, I couldn't do it any more. My energy was gone. I wanted to give up."

But manager Roger Schmidt convinced him to stay the course, and it paid off.

While his classmates went for a trip to Italy's Lake Garda, Havertz made his Champions League debut against Tottenham at Wembley in front of 85,000 spectators.

How could he fit in at Chelsea?

Havertz could be employed in a number of positions, and various systems.

The Blues already have an ensemble of wingers and, with the signing of Timo Werner, two highly talented strikers. There is no need to experiment with Havertz.

He moves effortlessly between the lines and can offer a unique presence in Chelsea's midfield. The likes of Christian Pulisic and Hakim Ziyech will benefit from having this kind of playmaker right next to them, while the deep-lying midfielders have a go-to guy if they are struggling.

Former team-mates and coaches have praised Havertz for his mental strength - seen as his biggest asset beside his footballing talent.

He may need a while to get accustomed to the Premier League and his new club after spending 10 years in Leverkusen, but there is little that could stop Havertz from becoming the linchpin of Chelsea's attack.