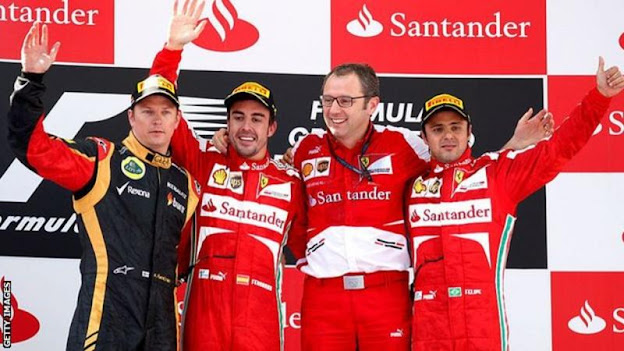 The Italian, who left Ferrari early in 2014, is the chief executive of sports car manufacturer Lamborghini.

The 55-year-old's appointment has not been announced by F1, but has been confirmed to the BBC by senior sources.

Chase Carey, CEO and chairman of F1 since US group Liberty Media took over the sport in 2017, will stay as chairman in a form still to be decided.

A spokesman for F1 declined to comment on Domenicali's new position. Domenicali himself did not immediately respond to a request to comment.

Domenicali has not yet formally signed a contract, but the news has been communicated to team bosses.

The impending appointment means the sport’s commercial rights holder and governing body will both be led by former Ferrari team bosses.

Domenicali took over at Ferrari from Jean Todt, the current FIA president, at the end of 2007.

Todt has said he will not stand for re-election when his third term ends next year.

Domenicali is a highly respected and well-liked figure in F1, a charismatic and genial character with a strong track record in management.

He is the last team principal under whom Ferrari won a world title - the constructors’ championship in 2008.

He resigned in 2014 after refusing to comply with then-president Luca di Montezemolo’s wish for him to sack Ferrari's engine head after the team badly underestimated the requirements of the new turbo-hybrid engine regulations.

Domenicali then took up a senior management role at Audi, before being appointed chief executive of Lamborghini, which is also part of the VW Audi Group.

He also has a senior role at the FIA as head of the single-seater commission.