The Madrid Open looks to be under threat after organisers were advised by the Spanish health ministry not to hold the event because of the city's "deteriorating" coronavirus situation.

The clay-court event is set to start in the Spanish capital on 12 September. 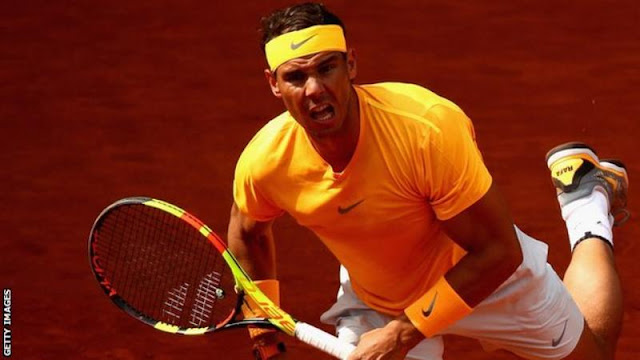 Organisers say they are "analysing and closely evaluating all the possible options". Spanish world number two Rafael Nadal is among the players who have signed up to the Madrid Open.

Spain has recorded more than 288,000 cases of coronavirus since the start of the pandemic, and 28,445 deaths, according to the latest figures on Friday.

Data from the European Centre for Disease Prevention and Control (ECDC) show the rate of infection in Spain is rising rapidly again.

"Due to the increase in cases of Covid-19 in Madrid in recent days, the organisers stated their concerns about being able to stage the tournament free from health complications that might affect the players, fans and staff," said a Madrid Open statement.

"In view of this situation, the organisers requested the help of Antonio Zapatero, deputy secretary of public health, and were advised not to stage the tournament due to the current trend of Covid-19 cases."

Tournament owner Ion Tiriac will make the final decision on whether to hold the event, which is set to be held as part of a reduced European clay-court season leading up to the French Open.

The French Open is scheduled to start on 27 September, with organisers hoping to allow up to 60% of crowd capacity at Roland Garros.

The professional tours will resume on Saturday when the WTA event in Palermo begins, with the ATP Tour returning later this month with the Cincinnati Masters.

That event is being held in a safety bubble in New York from 22 August, immediately before the US Open takes place at Flushing Meadows on 31 August.