Arsenal wants to save season by winning FA Cup - Lacazette 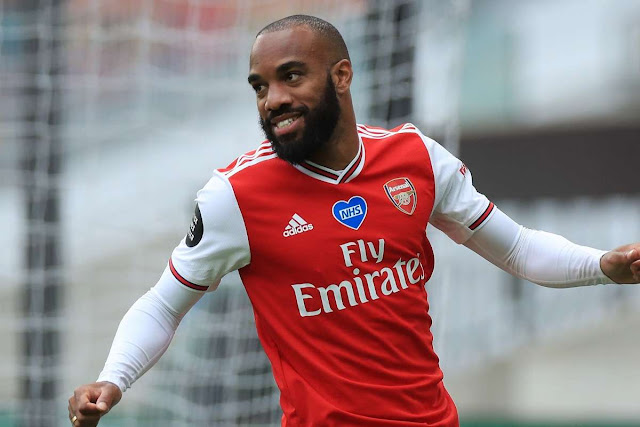 The Gunners, who have won a record 13 FA Cups, finished eighth in the Premier League and will not qualify for the Europa League if they lose at Wembley.

"We missed a few of our targets," said France striker Lacazette, 29.

Arsenal's Mikel Arteta and Chelsea's Frank Lampard are both aiming to win first trophies as managers.

Lacazette added: "It's been a weird year. We had the long stop, we changed manager, had different players.

"It was a difficult season, maybe the most difficult in my career, but I know I learned a lot. The FA Cup means a lot. I came to Arsenal to win trophies."

Blues boss Lampard, meanwhile, has backed winger Willian to produce another "fantastic" performance in the final game before the Brazilian's contract runs out.

"So I would expect nothing less than he's shown already, and that's Willian for you."

Arsenal defender Hector Bellerin missed the win over Watford as a precaution with a tight calf but has been back in training this week.

Influential Chelsea pair N'Golo Kante and Willian are both in the squad after injuries.

However, Ruben Loftus-Cheek sustained a minor injury in training on Thursday and has been ruled out.

@Guymowbray: The 139th FA Cup final will be one that makes history, of a kind that nobody wished for.

A crowdless Wembley for the semi-finals was an eerie enough experience, but for nobody to be there for our game's annual showpiece occasion? That's a whole new level.

The FA have done their best to ensure it still stands out as special, from the singing of Abide With Me (pre-recorded by Emeli Sande from the stadium roof) to a modified trophy and medal presentation, but it's inevitable that the day just won't have the same joy and excitement.

At least we can expect some from the game, a relatively evenly matched one between clubs who served up a truly entertaining final just three years ago.

It certainly ought to be closer than last year's season-ending Europa League final for both, with Arsenal undoubtedly improving under Mikel Arteta - bidding to follow George Graham in playing for and managing a Gunners cup-winning side.

Frank Lampard could be the third to do that for Chelsea (after Gianluca Vialli and Roberto Di Matteo), with the chance to put a trophy-winning seal on a first season in charge that has surpassed realistic expectations.

Let's hope the contest does too, to end the longest, strangest domestic season with at least some sort of smile.

To borrow a line from Abide With Me's final verse - "Shine through the gloom and point me to the skies".

Unlike last year's final between Manchester City and Watford, this game is very hard to call.

For starters, it is going to be a very different sort of occasion. We know now that football behind closed doors is strange, but this is going to be the strangest game yet.

It's an FA Cup final, and a derby game too, but it doesn't really feel like that. Fans are an intrinsic part of football regardless, but that is even more the case for the moments when you win things. Without them at Wembley, it just won't be the same.

I am still expecting a good game, though, and it is Arsenal who I think will edge it.

That's not to say Chelsea are not dangerous too. I just feel like Arsenal have got more momentum and confidence at the moment, but otherwise it is difficult to split the two sides.