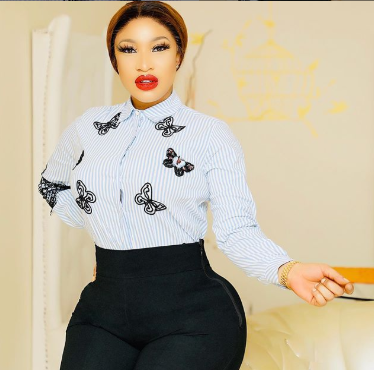 Tonto Dikeh has appealed to mentors of young ladies to also teach them how to make money and not relationship advice which according to her is becoming sickening.

In a post she shared on her Instagram page on Friday July 24, the mum of one said women should also aspire to become successful like the successful men they tend to be attracted to.

She pointed out that having a successful man by your side as a hardworking lady is not wrong but that some women just believe that a man must be their success ticket.

She added that there is so much pride in women being successful on their own terms. Her post reads

Please Teach young girls to make money, not every day relationship advice (It’s becoming sickening)Chasing after a rich man is not an achievement..Don’t get me wrong,Having a rich man by your side to support your OBVIOUS hard work is not a sin.

But there are some Extremely lazy girls/women who just feel that a man most be a success ticket..

Some women will have 1million and buy kayamata for 900k and then still cry economy bad..

Women who don’t believe in themselves to amount to nothing unless thru. A man or aphrodisiac

Sisterly leave kayamata, Work, Pray and be a BOSS He too can be proud of..TEACH THEM HOW TO ATTRACT MILLIONS NOT JUST men.#ps:- Dear young girls there are still women out there conquering the world on their Own..There is Pride in been your Own success!!