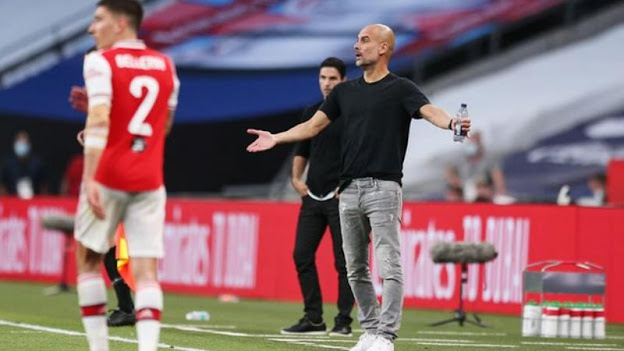 City had their two-year European suspension overturned by the Court of Arbitration for Sport (Cas) on 13 July.

City are understood to believe Arsenal were a chief instigator behind a collective request by eight Premier League clubs for Cas not to allow a delay to the ban pending appeal.

As the case was decided before the end of the season, no delay was needed.

Some senior figures within the game are annoyed City had their punishment for Financial Fair Play regulation breaches reduced, while the club are angry at the behaviour of some of their rivals.

Last week, Guardiola demanded an apology and told clubs to stop "whispering" about City behind their backs.

Chelsea, Burnley, Leicester, Liverpool, Manchester United, Tottenham and Wolves were the other seven top-flight clubs involved in the collective approach to Cas.

Reflecting on City's 2-0 FA Cup semi-final defeat by Arsenal on Saturday, Guardiola said: "Opponents always deserve my respect and credit. I have all the respect for what Arsenal are on the pitch. Not much off the pitch, but on the pitch, a lot."

City were irritated by the Gunners earlier in the season when the north London club approached Mikel Arteta - at the time Guardiola's assistant - to succeed the sacked Unai Emery as manager at Emirates Stadium.

Arteta was on the City bench for a 3-0 win at Arsenal in December, after which two senior Gunners executives travelled north to meet the 38-year-old Spaniard at his house for talks.

City had no intention of standing in Arteta's way but felt Arsenal should have told them what they were planning to do.