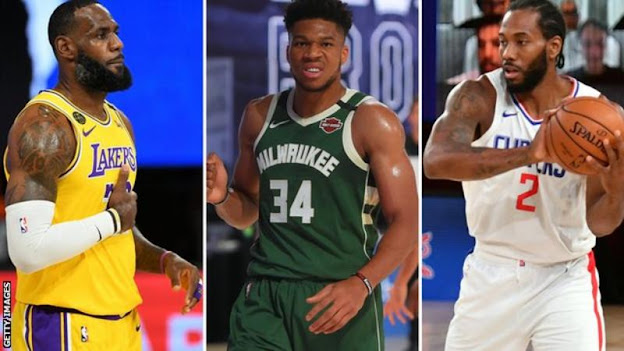 The likes of LeBron James, Kawhi Leonard and Giannis Antetokounmpo are now tenants of Mickey Mouse, with the regular season and play-offs being completed at Walt Disney World, Orlando.

To limit the number of personnel inside the NBA 'bubble', only 22 of the league's 30 teams are taking part. Franchises with no chance of progressing to the post-season are not involved.

With the first of the tip-offs on Thursday, here's a reminder of where we left the season and what to expect from the new-look NBA.

Who to look out for?

Led by James, the Los Angeles Lakers are the number one-ranked team in the Western Conference. James, now 35 and in his 17th season in the league, is trying to win an NBA title with his third franchise having previously lifted it with the Miami Heat and Cleveland Cavaliers.

The plot twist could come from the Lakers' city rivals the Los Angeles Clippers, with Leonard (a champion with the San Antonio Spurs and last season with the Toronto Raptors) himself vying for a slice of history by also winning the NBA Finals with three different franchises.

In the East the Milwaukee Bucks host the best record - as well as the best overall record in the league. Reigning Most Valuable Player Giannis Antetokounmpo is having another stellar season - but critics are still waiting to see if he can continue that form when it really matters, come play-off time.

Listed at 6ft 9in tall and with a wingspan of 7ft 2in the 'Greek Freak' will be trying to secure the Bucks' first Finals title since 1971.

There's no doubt the crowd plays a huge part in both building momentum and creating tension in sport - and in basketball the proximity of the fans and players means that's often magnified.

Statistics show overwhelmingly the team starting at home usually advances - so psychologically it's a huge advantage.

Well that's out the window.

Inside the NBA 'bubble' all games are played at a neutral venue with just the bench players, coaches, backroom staff and NBA personnel in the gym.

Unlike the Premier League the NBA has decided not to pump pre-recorded crowd noise into the venues. DJs will however be on hand to help drum up atmosphere and fans will be able to get a "courtside" experience by using video conferencing and 17-foot tall LED screens that will go round the court.

Haircuts, video games and cravings - life inside the NBA bubble

Walt Disney World is considered a luxury experience in its usual state - and the NBA has spent millions of dollars making it 'home' for the upcoming months.

A barber shop and games room have also been erected and there is a lake where players can do a spot of fishing. However Disney Park and all its rides are off limits.

With plenty of downtime and nowhere to go, some players decided to bring the fun to Disney World in the form of video games. And when Lakers team-mates James, Anthony Davis and Quinn Cook went online to play some NBA 2K, a lot of people were interested.

It appears it was not enough for some, though - as players are reported to have left the venue to get what they craved.

Sacramento Kings forward Richaun Holmes was placed in quarantine after he left the bubble to pick up a food delivery.

And just days before the restart, Clippers guard Lou Williams was granted permission to leave the bubble and return home to attend a family funeral - only for him to be ordered to spend 10 days in quarantine on his return.

He admitted he'd visited a strip club while outside but insisted it was because the venue served his favourite food.

Speaking about life in the bubble, Clippers head coach Doc Rivers said: "During the hiatus our guys did a great job in terms of conditioning. Once we got here, guys had the virus or had family stuff, what I call clutter. It's part of life and we've had to deal with that.

"But adversity is not all bad, you're going to go through hard stuff.

"For the most part I can't imagine someone's team not growing in this, especially the teams that have had all their guys, because it is a village you're living in, an NBA village.

"It's the greatest superstar basketball camp, It's like a dream. So I would say chemistry-wise it has probably been great for everybody, us included."

The NBA and its players have been one of the most vocal sport organisations to support the Black Lives Matter movement. Players have been invited to create slogans which will appear on their jerseys with social justice messages against racism and police brutality, ranging from 'I Can't Breathe' to 'Justice Now' and 'Education Reform'.

The courts will also show the Black Lives Matter message during games.

The Utah Jazz and New Orleans Pelicans are reportedly working together on a plan to kneel during the US national anthem and show support for the movement before they square off in the first official game of the restart on Thursday.