Man Utd Women: How they built a top-four WSL side in two years 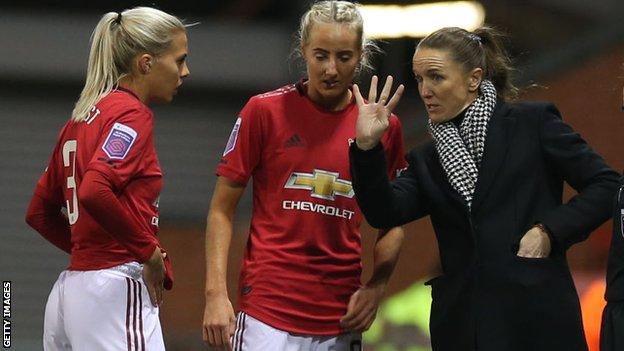 In their first Championship game two years ago, they beat Aston Villa 12-0. They went on to win the division with 18 victories from 20 games, before finishing fourth in their first season in the Women's Super League.

So how do you build a successful team so quickly, what impact have United had on the WSL and where do they go from here?

Manchester United were one of just two clubs among the world's top 10 richest teams not to have a women's side before they formed in 2018 and the club estimated the cost of re-forming would be around £5m.

Manager Casey Stoney had just four weeks "to build a team, attract 21 full-time players and put all of my backroom staff in place" before pre-season kicked off.

The final signing was secured two days before pre-season began and six weeks later, United faced Liverpool in their first cup match of the 2018-19 season - which they won 1-0.

Everything from sorting out contracts, dealing with agents, providing accommodation, setting up host families for players under the age of 18, organising education programmes and recruiting staff, was done from scratch and completed in time for the 2018-19 season.

To build players' affinity with the club, they were given tours of the museum at Old Trafford and an education on the history of the team.

And Stoney, who was just entering the world of management - aside from a brief player-manager stint at Chelsea in 2009 - received advice on the culture of the club from former United defender Phil Neville, the two having worked together while Stoney was assistant to Neville with England Women.

"I had a very clear strategy of how I wanted to go about my recruitment. I wanted a young team that I felt we could develop, coach and could get promotion in the first year," Stoney told BBC Sport.

"When we recruit players, we look at the likes of Lauren James - talented youngsters who can entertain the fans - but we also back that up with good centre-halves and full-backs who can defend and allow our front five, essentially, to attack with freedom."

What was United's impact on the WSL?

Stoney said her staff created an environment in which the players felt challenged and were "expected to win on day one" because it was all about "preparing them for WSL football" - something they would experience in just their second season.

Despite losing their first two WSL games 1-0 - against local rivals Manchester City and defending champions Arsenal - they went on to beat Liverpool 2-0 in their next game, won 3-0 at fellow promoted side Spurs and, in a standout performance, recorded an 11-1 win over Leicester City in the cup.

But it was off the pitch that United's impact was arguably bigger.

Despite the women's team having only existed for 12 months, the club's global fan base helped draw a crowd of 31,000 when they faced Manchester City at Etihad Stadium on the first day of the season and they attracted the fourth highest average attendance in the league at their Leigh Sports Village ground.

Their 'Barmy Army' supporters' group has brought "a bit of rivalry and atmosphere" from the men's game, according to Stoney, and it is perhaps no coincidence that the WSL's first season with a title sponsor and an overseas broadcast rights deal was in United's first campaign.

Manchester United's history, brand and reach was also "a selling point in terms of recruitment" when the team was set up, says Stoney.

"Even when you look back to when we first announced the team and the launch, Manchester United just did things differently. It was bigger and better than anything I'd ever seen in women's football," she said.

Where do they go from here?

The next step is to break into the WSL's top three, which means overcoming giants Chelsea, Manchester City and Arsenal.

But Stoney says the club need to "grow our budgets at a realistic expectation" and they are "aiming towards sustainability," as well as looking to compete.

United's only signing so far this summer is England international Lucy Staniforth, who joined from Birmingham City on a two-year deal.

"I don't think we're at a point where we're going to go out and make huge, marquee signings," said Stoney.

"We are growing and we want to do it slowly and in the right way. It's about adding a little bit more depth because we struggled last year at times when we had some injuries.

"It's about embedding our principles and our philosophies to give our players the right tools to go out there and compete with Chelsea, Manchester City and Arsenal. We do have very big ambitions to break into that top three."

Stoney also says the club need to "look at the structure underneath" and develop the academy so they can "bring youth through the system", while conversations have taken place on how the club can develop their training facilities.

"We've been based at Leigh Sports Village now for two years. Even since then we have improved it in terms of gym spaces, grass pitches for training and general facilities. I think we've got one of the best pitches in the league," she added.

But the prospect of sharing training facilities with the men's team seems to be a long way off, with Stoney saying "there's just not the capacity at Carrington".