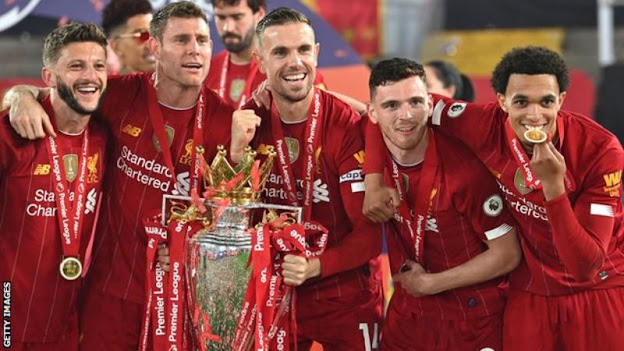 Lallana, 32, is set to leave Anfield when his contract expires on July 31.

"Being beside him lifting the Premier League trophy, nothing makes me happier," a tearful Lallana said about fellow England midfielder Henderson.

Lallana has won the Premier League, Champions League and Club World Cup during six years with the Reds.

However, the former Southampton player's spell has also been interrupted by a series of injuries, and it is 30-year-old Henderson - who Liverpool signed in 2011 - he credits for helping him get through tough moments.

"Having been with Jordan throughout the whole journey, I've been lucky enough to be alongside him when he had his dark moments - and he's also been alongside me in my dark moments, injuries," Lallana told the Liverpool club website.

Henderson was named Football Writers' Association Men's Footballer of the Year on Friday, in part because of his role leading a player initiative to donate funds to disadvantaged people during the coronavirus pandemic.

Lallana, who also won this season's Uefa Super Cup with Liverpool, also praised his captain's willingness to "take responsibility" for a poor results on the field.

"We drew 3-3 away to Sevilla [in the Champions League in November 2017] after being 3-0 up. It felt like a defeat and Jordan took full responsibility" Lallana recalls.

"Butthat just epitomises his selflessness. That's not in the good moments, that's the bad moments.

"He deserves to be captain of Liverpool holding the four trophies in one season more than anyone else, and no-one can take that away from him ever."

I hope he gets all the individual accolades - Gerrard

After Liverpool had been confirmed as league champions in June, Henderson's predecessor as Reds skipper, Steven Gerrard, posted an image on social media of himself passing the captain's armband to his then team-mate in 2015.

"Couldn't have passed it to a better person. Proud of you mate," he wrote.

And the Anfield legend, who is now manager of Scottish Premiership side Rangers, echoed that sentiment during an interview on the MOTD podcast.

"Jordan was a young kid at Sunderland and his parents came up to me and asked me to take him under my wing as they were worried about his big move," said former England midfielder Gerrard.

"He had a tough first year but he remained quiet, worked hard in the gym and did his talking on the pitch."

Gerrard says he is "delighted" with Henderson's success and that he "deserves to be European and Premier League champion".

"I hope he gets all the individual accolades that follow," the 40-year-old, who won the Champions League, two FA Cups and three League Cups with Liverpool but fell agonisingly short of leading them to the Premier League title in 2013-14, added.

"I've witnessed the downs, the setbacks and the pain, and now to see him absolutely delivering is fantastic - as a team-mate and a friend.

"People who don't know Jordan, are starting to see he is a fantastic footballer and he is a wonderful human being, and that is more important for me."