'Anthony Joshua would fight in my back garden' - Eddie Hearn

The British boxer, 30, has not fought since he regained his WBA, IBF and WBO heavyweight titles from Andy Ruiz Jr last December due to Covid-19.

Hearn has erected a ring in the grounds of his Essex estate in a bid to resurrect the sport for an event dubbed 'Fight Camp'.

"If we were faced with the option of having no fans for an Anthony Joshua fight, we would still look to go ahead. He's spent a lot of time training out here in this garden so he would have no problem fighting here himself.

"He was here a couple of weeks ago. He loves to fight, to box and it's not just about fighting in a huge arena - Wembley Stadium, Madison Square Garden - it's about boxing.

"We want him to be in front of crowds. But for his career, for his development, he needs to fight this year."

Joshua, who has also reached an agreement for two fights with fellow Briton Tyson Fury, was originally scheduled to fight Kubrat Pulev in June, but the bout was postponed because of coronavirus. 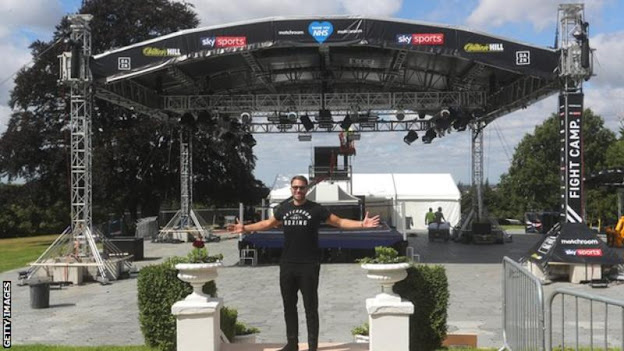 "Of course fighters want to earn as much money as possible but they also need to develop as fighters and I think the Kubrat Pulev fight is a good, solid, tough fight for him and I am almost certain you will see that fight this year.

"He wants to improve as a fighter and he will do it anywhere, anytime."

'Fight Camp' opens with Sam Eggington defending his IBF international super-welterweight title against Ted Cheeseman on Saturday, with more events on 7 and 14 August, while James Tennyson will box Gavin Gwynne for the vacant British title.

"I wanted to bring boxing back with a bang - we're a major sport and we had to make a big impression," said Hearn.