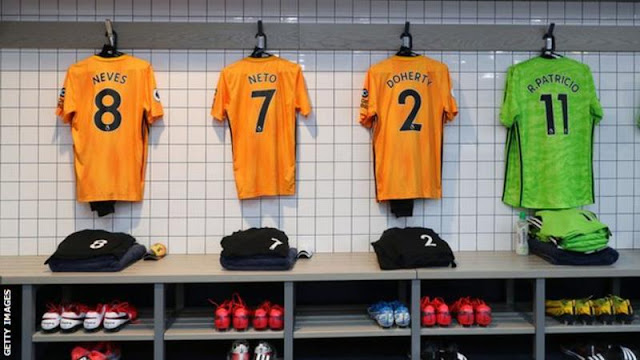 The Premier League will also support any player who chooses to 'take a knee' before or during matches.

Players in Germany have made gestures of solidarity with people protesting about the death of George Floyd.

"We, the players, stand together with the singular objective of eradicating racial prejudice," read a statement.

In a joint message from all 20 clubs, players added that they were committed to "a global society of inclusion, respect, and equal opportunities for all, regardless of their colour or creed".

A Black Lives Matter badge will feature on all playing shirts for the rest of the season alongside a badge thanking NHS staff for their work during the coronavirus outbreak.

BBC Sport has learned that Watford captain Troy Deeney played a pivotal role in the discussions between club captains and the Premier League, alongside Leicester City's Wes Morgan.

Deeney's girlfriend, Alisha Hosannah, has designed the Black Lives Matter badge that will be used on the players' shirts.

Several Premier League squads have already 'taken a knee' in training-ground images shared on social media, and anti-racism charity Kick It Out had asked that players feel free to do so on the pitch.

The Football Association has said it will take a "common sense approach" to such protests.

Four players, including Borussia Dortmund's England forward Jadon Sancho, were initially investigated by the Bundesliga authorities for making clear their support for anti-racism demonstrations in the wake of the death of 46-year-old Floyd in police custody in the United States last month.

None was subsequently punished and the German Football Association said it would continue to allow such displays of support over the coming weeks.

The Premier League resumes behind closed doors on 17 June after a three-month suspension caused by the pandemic.

'It's a great start, but I then want to see something tangible'

Former England, Newcastle and Spurs midfielder Jermaine Jenas, who made 280 Premier League appearances between 2002 and 2013, hopes the campaign for change continues beyond those first 12 games.

Speaking to BBC Radio 5 Live, he said: "It's brilliant that all the clubs and the players have come together and said that this is what they want. I think it's a great message because the Premier League is one of the most powerful businesses in the world.

"I'm all for it in terms of the representation and for each club and player to be doing it. But I think the question on most people's lips is: what next?

"What about the week after? Does it just fade out and it's 'OK, we did our little bit and it's gone now'. Or are we actually going to see some real change within our game, our own house?

"There's been huge conversations about the lack of opportunities for black coaches. We need to quash all of that by starting to implement [diversity] at the hiring level of management, at the top clubs and within the FA."