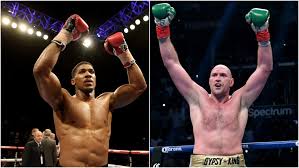 Talks over a historic bout for the undisputed title began in early May.

Joshua, 30, holds the WBA, IBF and WBO belts, while 31-year-old Fury is the WBC champion.

"We have a financial deal in place between the two of them for two fights in 2021" Hearn, who is Joshua's promoter, told BBC Radio 5 Live.

Fury expressed his delight at the news in a social media post. He said he would fight Joshua in 2021, but would first have to overcome the "hurdle in the road", Deontay Wilder, in a third meeting. Fury is contracted to fight the American, from whom he won the WBC title in February.

Joshua, who reclaimed his world titles in December, has to face his mandatory challenger, Bulgaria's Kubrat Pulev, when the sport fully resumes after the coronavirus shutdown.

Hearn added: "They do have intermediate fights. There is Dillian Whyte as a mandatory as well, but always the most difficult part of any deal is getting two parties to agree to the financial elements of the deal.

"But, of course, in an ideal world you've got two Britons there who are heavyweight champions. It will never happen again, it has never happened previously and it's a chance for Britain to gain all the belts in the heavyweight division."

In a statement, Fury's promoter, Frank Warren, said "no contracts have been signed".

"Obviously, we are keen to make the fight that British fans demand and will continue negotiations in order to deliver Tyson his shot at becoming the undisputed heavyweight champion of the world," he added.

"Things are going in the right direction and we couldn't be more happy that a potential mega fight is in reach."

Speaking to BBC Radio 5 Live, Warren added: "The only way it could not happen is if one of the guys gets beaten."

"[Fury's] really happy. It's something he's wanted for a long, long time. It's a great fight for both of them and for fans in this country and round the world.

"It's not going to get any more competitive than this."