Many Feared Killed In Communal Clash In Adamawa 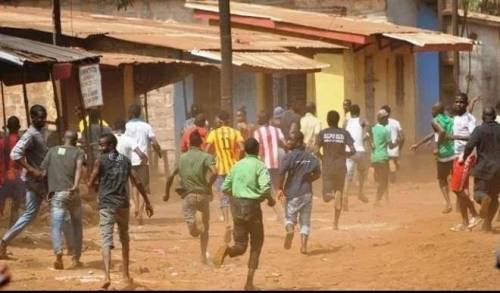 No fewer than 15 persons are feared killed in a violent clash between two communities in Adamawa State.

Reports indicates that sophisticated firearms were used by the warring communities in Tingno under Lamurde Local Government Area, causing destruction of lives and property.

SaharaReporters gathered that the fight began on Thursday night between the indigenous Chobok tribe and their Hausa settlers, according a source in the area.

Sources told our correspondent that the fight was sparked by contention over the right to slaughter a pig at a local abattoir, which later degenerated into a bloody fight.

There are indications that more than 15 people may have been killed as a result of the conflict.

Spokesperson for the police in the state, DSP Suleiman Nguroje, has confirmed the violent conflict but did not give casualty details.

He said, “The state Commissioner of Police has directed the Squadron Mobile Commander and the area Commander Numan Division, to proceed with all DPOs within that area and all other operational commanders.

“Later on, the governor, Ahmadu Umaru Fintiri, mobilised all the service commanders and we all visited the area.

“When we arrived, we met our people already in the town, and gunshots were still ongoing.

“But with the military and police on the ground, most of them were pushed back into the mountains and the town was returned to normalcy.

“And about now, our men have also been instructed to go round and ascertain whether there were casualties."