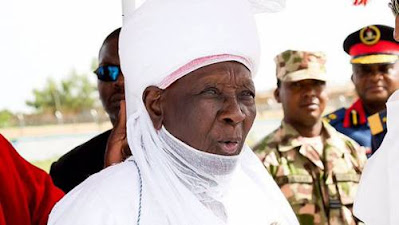 Emir of Daura, Alhaji Umar Farouk Umar, has been hospitalised at the Intensive Care Unit of the Federal Medical Centre in Kastina State. Daura is the hometown of President Muhammadu Buhari.

A palace source told SaharaReporters on Tuesday that Umar was rushed to the hospital on Monday night in a critical condition.

The emir is said to have contracted COVID-19 from Kastina State index case, Dr Aminu Yakubu, a Daura-based private medical practitioner, who died of the virus last month.

SaharaReporters gathered that the late Yakubu was the personal physician of Emir Umar and had met with him and his first wife, Hajiya Binta Umar, shortly before he died.

“Emir of Daura, Alhaji Farouk Umar, was last night rushed to FMC Katsina. Presently, all of us in the palace have been told to go on self-isolation.

“The Katsina State index case, that doctor that died, interacted with the emir and his first wife, Hajia Binta, who is now dead. The index case was the personal doctor of the emir.

“The emir was advised to self-isolate after the index case died but he dismissed it and allowed free movement in the palace,” the source told SaharaReporters.

Dr Mustapha Inuwa, Secretary to the State Government, had on Monday said there have been some COVID-19 positive cases from the palace, while samples of 89 people had been taken from the place for screening by the Nigeria Centre for Disease Control.