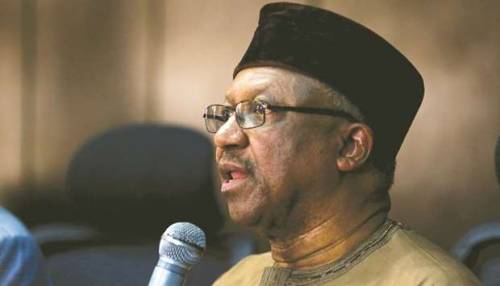 Nursing Group Admin, an alliance of progressive administrators and reliable stakeholders, has called for the immediate resignation of the Minister of Health, Dr Osagie Ehanire, over his comments on hazard allowance for doctors and health workers at the frontline of the Coronavirus outbreak in the country.


The Minister, who spoke while meeting with the leadership of the National Assembly in Abuja on Thursday, said he was not aware if medical doctors and other health practitioners managing COVID-19 patients in Nigeria were paid any hazard allowance.
Irked by the response of the minister, the nursing group said he must immediately resign for not knowing what was happening in the health sector.
The group expressed sadness and total disappointment at the minister in an open letter sent to him, which was also sent to Speaker of the House of Representatives, Femi Gbajabiamila; Senate President, Ahmad Lawan; and President Muhammadu Buhari.
They claimed that the health sector has for many years suffered from the hands of egoistic leaders, who have misplaced their priorities as against the normalcy to reshape and reform the health sector
They posited that the rot in the health sector was as a result of the negligence and political bias that has only seen a section of healthcare professionals continuing to be both ministers for health in this country.
“At this crucial period, the leadership of the Ministry of Health who should be making efforts to boost the morale of healthcare professionals as the frontline defence in this battle to eradicate COVID-19, has failed in careful encouragements to see the success of the battle.
“It is unfortunate that the minister would be insensitive on national TV to further dampen the morale of the already overwhelmed healthcare staff by saying they only check temperatures and he is not aware of the ridiculous N5,000 hazard allowance being paid to healthcare professionals,” the letter reads partly.
The nursing group are demanding in addition to the immediate resignation of the minister, an apology letter to all healthcare professionals in the country.
“We demand an immediate resignation of Dr Osagie Ehanire as Minister of Health.
“An apology in four national dailies to all healthcare professionals whose spirit you have dampened by your ignorance and gross lack of understanding of your responsibilities.
“That the government immediately constitute a committee to review the ridiculous N5,000 hazard allowance being paid to health workers and this report made available in two weeks.”
The group also urged the government to change the status quo of “only fielding a member of the healthcare professional as the minister, a review should be done immediately and other competent members such as nurses, pharmacists, laboratory scientists and other healthcare professionals are called upon to also serve their fatherland.”
Health