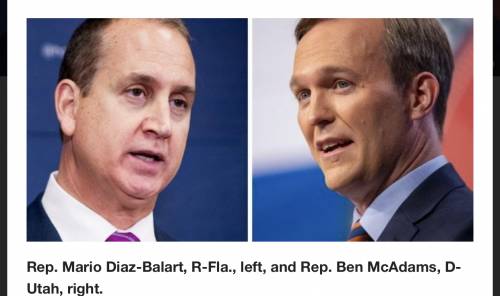 Two United States lawmakers including a Florida representative on Wednesday became the first members of Congress to announce they had tested positive for the novel Coronavirus.

According to AFP, Congressman Mario Diaz-Balart’s office said in a statement that “just a short while ago, he was notified that he has tested positive for COVID-19.”
The Republican, who represents part of Miami, follows the city’s Mayor, Francis Suarez, who announced that he had tested positive for Coronavirus last week.
They are following CDC-specified self-isolation guidelines at their various homes.
Diaz-Balart’s diagnosis prompted a member of congressional leadership, the number two Republican Steve Scalise to immediately self-quarantine as he had an extended meeting with his colleague last week.
“Fortunately, I am not experiencing any symptoms, and will continue working remotely on Congress’s Coronavirus response” and remain in close contact with Trump administration officials to ensure that swift action to address the crisis continues, Scalise said in a statement.
In Utah, Democrat, Ben McAdams, became the second congressman to announce he tested positive.
After developing a mild cold on Saturday evening when he returned from Washington, he said, “My symptoms got worse and I developed a fever, a dry cough, laboured breathing and I remained self-quarantined.”
He was tested on Tuesday, received a positive diagnosis on Wednesday and remains in isolation at home.
The attending physician of the US Congress said in a statement released by House Speaker, Nancy Pelosi, that Diaz-Balart and McAdams “are ill, but in good condition.”
They are following self-isolation guidelines set forth by US health officials, he added.
Diaz-Balart said that he had entered into quarantine and was working from his Washington apartment.
“I want everyone to know that I am feeling much better,” he said.
“However, it is important that everyone take this extremely seriously and follow CDC guidelines in order to avoid getting sick and mitigate the spread of this virus.”
Several US lawmakers have self-quarantined after coming in contact with a man, who attended a conservative conference near Washington shortly before he tested positive for Coronavirus.
The United States so far has more than 9,300 cases and 150 deaths, according to a John Hopkins University tracker.
News Politics