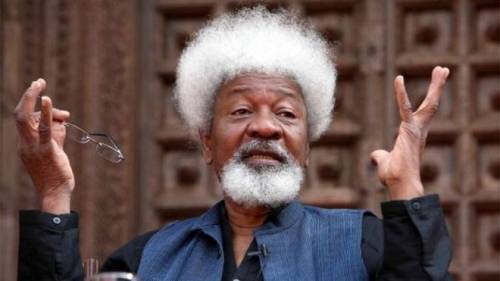 Nobel Laureate, Prof Wole Soyinka, has condemned the dethronement of Muhammadu Sanusi II as Emir of Kano, labeling the incident as a gross abuse of power.


Expressing his views in a piece on Thursday, Soyinka said that Sanusi's removal showed that the North was not ready to embrace the truth and modern way of life.
Sanusi, a former governor of Nigeria’s Central Bank, was ousted from the throne on Monday by the Kano State Government.
He is currently taking refuge at Awe, a small town in Nasarawa State where he was banished to.
Speaking on the situation, Soyinka said that the removal of Sanusi was a huge loss to the North, who could have benefitted from his wealth of knowledge as a seasoned economist to develop the region.
Soyinka said, "What a pity, Ganduje lacked friends who could have saved him from himself!
"Insofar as one can acknowledge certain valued elements in traditional institutions, the man he thinks he has humiliated has demonstrated that he is one of the greatest reformers even of the feudal order.
"By contrast, Ganduje’s conduct, apart from the innate travesty of justice in this recent move, is on a par with the repudiated colonial order, one that out-feudalised feudalism itself, and is synonymous with authoritarianism of the crudest temper.
"The record shows, in this particular instance, that it is one that embodies modernised cronyism and alienated pomp and power – never mind the cosmetic gestures such as almajiri  reformation.
"It has proved one of the worst examples of a system that enables even the least deserving to exercise arbitrary, unmerited authority that beggars even the despotism of the most feudalistic traditional arrangements.
"Emir Sanusi was a one-man EFCC sanitisations squad in the banking system taking on the powerful corrupters of that institution. Unblinking, he trod on the interests of powerful beneficiaries of a worm-infested sector and, in the process, created permanent enemies.
"By contrast, confidence in immunity has catapulted his tormentor to the ranks of the most notorious public faces of the disorder that Sanusi strove to eradicate.
"Sanusi was one of the early warning voices against religious extremism whose bitter fruits the nation is currently reaping.
"Those who wish to understand how deeply he had anticipated and explored the potential consequences of this menace should refer to his novelette: The Adulteress’ Diary, a work that exposes and satirises the hypocrisy of fundamentalist Islamic clericalism from the inside, that is, from the authoritative point of view of an Islamic scholar.
"This work did not endear him to hard core fundamentalist purveyors of social division but even those opponents would have been wise to pay heed to his exposition, and its implicit warning.
"Why, I am not certain, but I do have the feeling that the palace gates of the Kano emirate are not yet definitively slammed against this Islamic scholar, royal scion and seasoned economist.
"It is just a feeling. Closed and bared, or merely shut however, the doors of enlightened society remain wide open to Muhammad Sanusi.
"As for his current crowing nemesis, a different kind of gate remain yawning to receive him when, as must, the days of governorship immunity finally come to an end.
"Those whom the gods would destroy, they first make mad. The list is long, there are comrades in impunity  awaiting their day of reckoning.
"The files remain open and the nation remains on the watch. The wheels of justice grind slowly, but sooner or later, they arrive."
Opinion