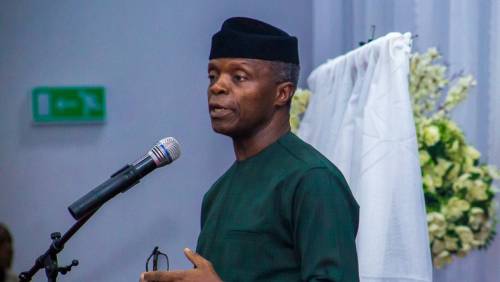 Vice President of Nigeria, Yemi Osinbajo, has confirmed the death of one of his police escorts.


The escort, identified as Inspector Ali Gomina, died while escorting Osinbajo to the airport on a trip to Lagos.
Sources had revealed that Gomina was knocked down by a trailer while clearing the way for Osinbajo’s motorcade.
In a statement by his Senior Special Assistant on Media and Publicity, Laolu Akande, Osinbajo described the death of Gomina a sad occurrence.
He said, “With grief in our hearts, we announce the death of one of the police escort riders on the Vice President's convoy, Inspector Ali Gomina, aged 45, who was involved in a road accident while on official duty.
“The accident occurred on the road to the Nnamdi Azikiwe International Airport."
News