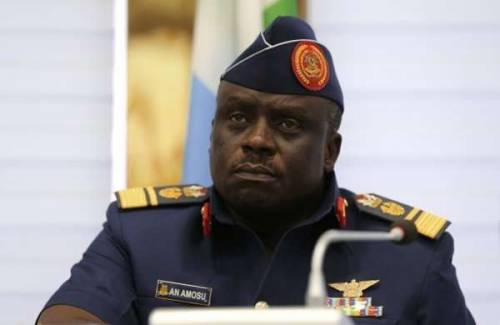 The General Manager of Blue Boulevard Limited, Peter-Kings Osunde, said he transferred the sum of N50m into the personal account of former Chief of Air Staff, Air Marshal Adesola Amosu (retd), as gratification for the building projects he executed for the Nigerian Air Force.


He made the revelation on Monday in Abuja while appearing before the House of Representatives joint committees on Air Force and Justice at the investigative hearing to probe the Nigerian Air Force over a controversial ₦10bn building project owned by Blue Boulevard Limited.
The company had petitioned the House after accusing the military of breach of an agreement they had over a land NAF leased to the company.
Osunde said the Amosu demanded N50m from him as bribe money on the project.
He said, “The former Chief of Air Staff, Adesola Amosun collected N50m from me. I paid the money into his personal account and I have the evidence. He cannot deny it.”
He explained how the project was frustrated through the invasion of the site by Air Force officers with a view to forcing him to accede to the demands of the Chief of Air Staff.
He revealed that the leadership of the Nigerian Air Force breached the first contractual agreement and forced him to enter into second agreement in the name of ‘oiling’ their pockets.
Osunde claimed that his company had built a mall and market for the Air Force in Port Harcourt, Rivers State.
He also accused them of ‘messing up’ the project before the expiration of the set duration “at a time over ₦10bn had been spent”.
He said the company funded the project and was to run it for 20 years before handing it back to the Nigerian Air Force.
News