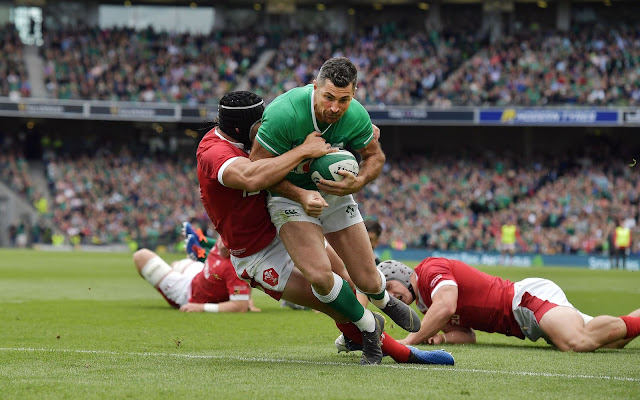 Super League clubs will meet the Rugby Football League on Monday to discuss the situation after most league and cup games went ahead at the weekend.


Among the options are playing behind closed doors or postponing the league.
"Government has to look at a degree of support for our sport," said McManus.
"There's huge financial implications, the very existence of our sport is on the line," he told BBC Radio Four's Today programme.
"We're different to soccer, probably different to rugby union, we're at the beginning of our season, this is open-ended both in time and terms of quantum, no-one knows the full extent of it."
McManus says any cut to the money Super League is paid by broadcasters could threaten every single club.
"St Helens is probably in the best financial position of any rugby club in the country of either code," he said.
"We've got our own stadium, we've not got a penny of debt, we're profitable, but we have a very high cost base, and if your income evaporates overnight - and that could well happen - certainly the match day income will."
Two Super League games and seven Challenge Cup fifth-round ties were played across Friday and Sunday, with Leeds' scheduled trip to Catalans Dragons the only game to be postponed after the Rhinos decided not to travel on Friday when one of their players showed symptoms of the coronavirus but subsequently tested negative.
Late on Sunday, Toronto Wolfpack head coach Brian McDermott said four of his players were self-isolating after experiencing mild coronavirus symptoms and the club were "waiting for a directive from the League's governors".
"We take this very seriously and as a precaution, we have stood down our entire playing staff in the UK," McDermott added in a statement.
The Wolfpack were scheduled to play Wakefield Trinity at York City's Bootham Crescent ground on Sunday.

Reigning Super League champions Saints were beaten 28-14 by Castleford on Sunday, with Cas coach Daryl Powell acknowledging the difficult situation after his side's win.
"There's an eerie feeling around everywhere. It will be the same for everybody, it will be difficult," he said.
"We have to try and find a way of managing it best that we can. Nobody knows where it's going to take us over the next weeks and months."
The only top-flight fixture not played over the weekend was Leeds' trip to Catalans Dragons after the Rhinos opted not to travel to Perpignan for their Super League game on Saturday.
"This sport has shown itself to be resilient over the last 125 years and hopefully we're going to be very collegiate over the next couple of days and find some ways forward," RFL chief executive Ralph Rimmer said on Sunday.
"We face a test, as does the rest of the country.
"In any modelling that we do going forward we have to consider player welfare issues, competition integrity issues and keeping the clubs solvent."

Casty says he 'will not travel'

Catalans Dragons captain Remi Casty has said he plans to self-isolate and has informed the club he will not attend training sessions.
"I'm not sick, I'm not afraid of being either, but I don't want to catch this virus and pass it on to someone more fragile," Casty told the Perpignan-based L'Independent newspaper.
"You have to be responsible for your actions, it is not a simple flu, we have never known a health crisis of this magnitude.
"I have just warned my team-mates and the staff that I will not be present tomorrow (Monday) in training. I made this decision and I will stick to it."
Les Dracs are scheduled to play Wigan at the DW Stadium on Sunday.
Health IFTTT Sports